Call for entries for the international ideas competition to convert 21,500 m2 of tracks in the centre of Bilbao into an underground section 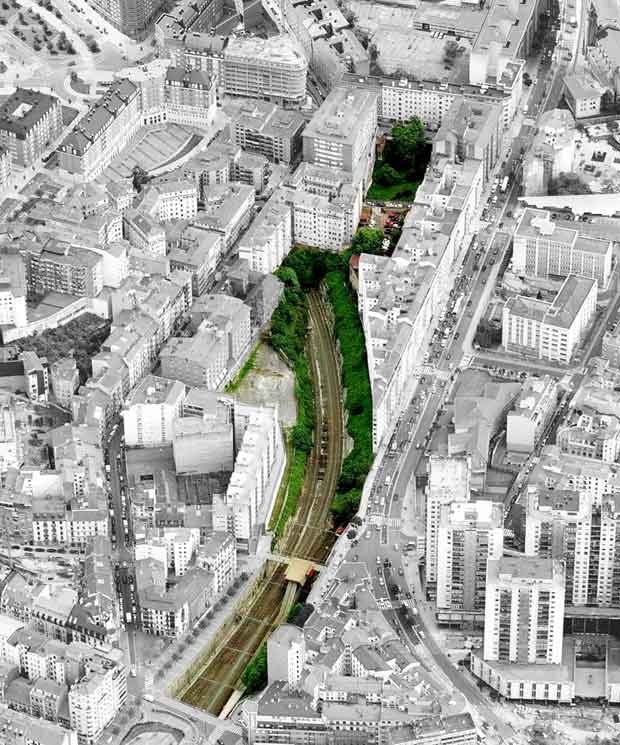 Bilbao, the Basque city that is internationally renowned for its urban regeneration process sparked by Frank Ghery’s Guggenheim Museum, has convened an international ideas competition to recover 21,500 m2 occupied by the access tracks to its main station. It is the first edition of a competition specifically aimed at students and recent graduates in architecture, with a first prize of 3,000 euros, and which is aimed at contributing to the urban regeneration of this Basque city.

The competition is the initiative of BIA (Bilbao Bizkaia Architecture), a group of professionals from the Basque Country who are the driving force behind the process to energise architecture and urban development.  They have opted to tackle the challenges of the profession from concepts such as internationalisation, exchange or grassroots participation.

The competition is open to projects to convert the railway tracks located in the centre of Bilbao, in a downtown area of the city where four neighbourhoods meet, into an underground section. The trench along which the railways tracks run has traditionally been a physical barrier that has affected the development of the zone and the mobility of local residents.

The zone is a strategic opportunity for the urban regeneration of the city. BIA Urban Regeneration Forum is looking for proposals that use urban development as a driver for social regeneration. The aim is to recover the identity of the zone – historically linked to railway workers and to the people working at the nearby mines -, and at the same time create new focal points of interest, while optimising the mobility and functionality of the area, with spaces for the general public to meet and interrelate.

The competition is open, with anonymous entries and no entry fee, and is open to students and young architects, who must have graduated in the last five years.  They have up to 7 September to submit their entries.  They can enter the competition individually or in groups, provided that all their members meet the condition of being a student or recent graduate.

The competition is part of the BIA (Bilbao Bizkaia Architecture) initiative, whose first action is going to be the hosting of the first “Urban Regeneration Forum”, which will be held in the Basque city in September.  It will be a week packed with activities that will end with a scientific conference that is expected to attract around 300 international experts in the fields of architecture and urban development.

Given that the competition for the conversion of the tracks into an underground section comes under the thematic area of the forum, the Jury will select the 10 most representatives and outstanding entries to be displayed to the public in Bilbao during the Conference. The general public will be able to take part by voting for their favourite entry. All the entries will also be available through the biaforum.org website and Internet users will be able to vote.. The entry with the most votes will receive the BIA Network Award.

The BIA Jury will award a first prize worth 3,000 euros, along with two runner-up prizes of 500 euros each.  The list of the members of the BIA Jury will be announced on the competition website once the jury has been finalised. The jury will have at least eight members, seven of whom will be architects representing the fields of the administration, teaching, professional body of architects and neighbourhood associative movement.