In cause the major aspiration of the architecture it must be that of the good neighborhood. This it is the ambition of these modest housings, located in the north saw of Madrid. The employment of the local materials, of the paces, proportions and language, though modified, altered and updated, in the search of a nice continuity it is a duty above, in occasions, of the spectacular thing or the extravagant thing. 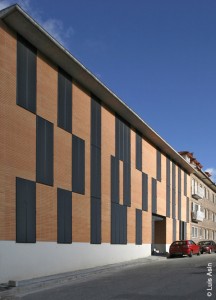 San Rafael, a small locality in the north slope of the saw of Guadarrama, always occupied the territory by means of semi-detached houses of summer vacation that, though lacking generally of character, they have formed a landscape in which the near mountains have supported always the protagonism.

Nevertheless new plannings and normative developments in the locality impose tipologías different. Of the open to dialog tension between the new urban manners and the sure persistence of buildings of minor size, the offer is born.

Completing the existing apple one tried to support a serene dialog with the near buildings: on the one hand a dividing neighbor, without character and with an excessive height, was forcing to find a strategy that was giving certain continuity in height, for other one, the conservation of buildings exempt and very near that the offer was deserving certain consideration. It is for it that there used alignments, the cornice, and the paces of the hollows to articulate these fronts suggesting heights and material different densities.

One resorted to the traditional solution in the neighborhood of the shutters to isolate the hollows of the light and noise, beside trying a sure closing in the months in which the house was not inhabited.

The front, there was solved by a modest brick arranged with the constructive logic that implicit ride his placement to sardinel. It was a question, to all the effects, of a closing, more that of giving idea of a false wall of load. One thought that the apparel that traditionally he contributes to the hobble, is in turn an obstacle for the understanding of a wall that you upset already it works in his structural sense. Especially inside a constructive logic that is accustomed to be employed at relation to the forces of the gravity with supports and forged. This solution, by no means new and with a constructive very own tradition of the seventies, was putting nevertheless in value the own brick as basic and modest piece of the front.

Showed each of the ceramic pieces in a counterfoil, contributing with his individuality and not with his union, we believed, it was helping to avoid this problematics. Free pieces, in rows and columns as the only individuals, without hobble, were placed scarcely linked to each other by metallic keys that were doing the times of invisible apparel. In this ceramic, almost abstract plot, the hollows of lighting, tangent for his vertexes, were helping to reinforce this idea anti-gravitartoria. It was not treating itself and it does not appear as a heavy wall but as a plementería with his own logic and sense. Something that might be perceived even from his planeidad, even as constructive language.

The vertical dimensions of the hollows, and his apparent disorder, were trying to establish connections with the neighboring fronts so much present as for coming, together with a good pace of the street. This vibrato achieved by means of the dispositions of hollows and clumps was not looking for another thing that certain sense of good neighborhood. By means of certain material and formal modesty it was a question of achieving something of the discretion that in you cause the places they suggest, almost as the major ambition to which the projects could aspire.