On the neighbourhood of Saint Lázaro structures  the expansion to the north of the city of Santiago de Compostela. His immediate connection with the highway To9 that joins splits it north and south of Galicia, has favoured the implantation of varied of the big collective equipments of the city.

At the side of this main scale accommodates  with some difficulty the traditional fabric of the neighbourhood, very tied also to the entrance of the French way. Around the church of Saint Lázaro bank  several groups of houses of crujía narrow and of one to three plants of height, many of them simple remedos of what understand by traditional architecture, others, the less, examples perhaps purer of that.

However, the presence of the structure, of the traditional plot, still is patent. The special Plan drafted for the neighbourhood insists in the preservation of this traditional fabric and defines for any new construction, forms, volumenes and similar finishings to which perhaps some day were majority: limitation of height to low plant and two plants, façades in which it prevail the solid on the gap with external finishing in revoke, covers of knit Arab, etc. 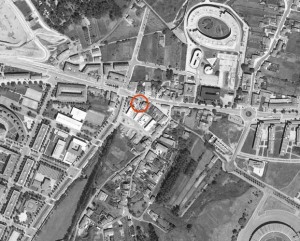 Our project for a house unifamiliar in Saint Lázaro in a very small plot of some 40 m2 of plant, accepts without discussion the norms imposed putting the elder taken care in the execution of these timeless elements of the simplest architecture- zócalo, window, revoke, roof- trusting that the work detained on them confer him to the house the longed for belonging to the place where builds.

The zócalo of pieces of granite tezal elevates  until the level of the first plant, to move away with clarity of salpicaduras and hits the feeblest revoke that on thermal isolation outside covers the rest of the façades; the windows, like gap that perfora the wall, are all of the same measure but present variations in his carpentries in function of the inner spaces to which give service; the cover of knit curve encircles  in his perimeter with an edge of sheet of zinc that conforms the convenient albardillas and canalones.

This construction in traditional appearance achieves  instead by means of the artificios that the architecture allows: the structure of the house is of slim profiles laminados and thin losas of concrete, those to thin in the possible the façades, these to fulfil with the exigencias of height imposed by the rule. Between the pillars has  a ceramic wall of an alone leaf with thermal isolation of 6 cm to the external face, that revokes  with mortar and finishes  white painting.

In the interior of the house, so small, the bedrooms in the first plant and the room and kitchen in the space abuhardillado of the high plant- in search of the seen to the city- could say that they occupy what does not occupy the stairs, that carries  to the medianera with the neighbouring house allowing that all the stays have  on the three façades of the house, to achieve some luminous and sober interiors.