The Dutch architect Anne Holtrop informs guest in the FORUMS ESARQ 2013 with the qualified conference “A possible architecture”, in the one that will show an intuitive and imaginative architecture, which result lends to diverse interpretations on the part of the observer.

A possible architecture. Anne Holtrop departs from forms or materials that often are foreign to the logic of the architecture. In the conviction of which the things always can be checked and reinterpreted, and they can turn into architecture. Interested in a certain way of making and seeing, as in Rorschach’s drawings in which you can see both a butterfly and a lake; his form of work with these materials is intuitive, almost without a preconceived plan, without knowing the final result in advance. 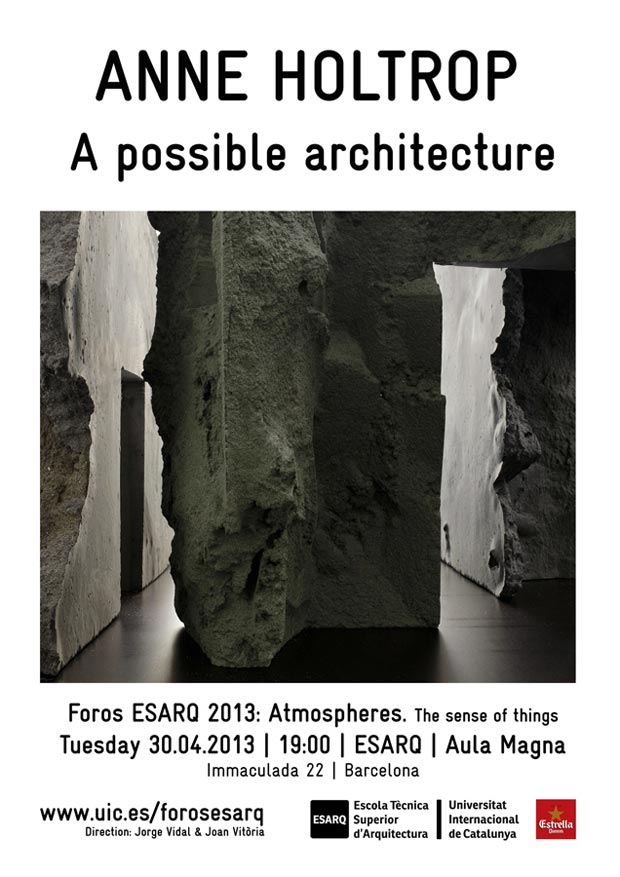 As was suggesting the Belgian architect Jaques Gillet ” The function is in the process “. For Holtrop, it is a process in which the accident, together with the coincidence, they take the forward. The architect chases that his work continues being interpretable, in the same way as it originated. Not to come to the only conclusion even after finishing the project. Hereby, the architecture emerges imagining the following step, based always on the previous steps that have taken.

Anne Holtrop (1977, Holland), it graduated cum laude in architecture in the Academy of Architecture of Amsterdam in 2005. It initiated his practice in the same year and obtained several scholarships of the Fonds BKVB, beside received the Prize Charlotte Kohler of Architecture of the Cultural Foundation Prince Bernhard. It has done residences in Tokyo in 2009, in 2011 in Seoul and in 2012 in Copenhagen. He is the director of course for the máster of nearby spaces in the Sandberg Instituut Amsterdam, and is a publisher of OASE, a magazine of independent architecture. His work includes projects of architecture for temporary and permanent buildings, and collaborates in occasions with the artists Krijn de Koning and Bas Princen.