Spain will promote the identity of the European cultures to promote the sustainable economic growth, during his rotary presidency of the EU in the first semester of this year. The Culture minister, Ángeles González-Sinde today, has presented in Brussels priorities of the Spanish presidency with regard to Culture and the facility Crossings video of Daniel Canogar that will remain in the atrium of the building Justus Lipsius, the Council’s headquarters of the EU. 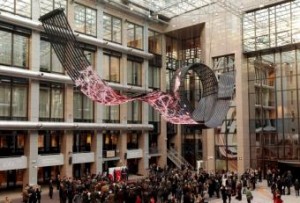 Crossings is a screen escultórica of 33 meters of long, to eight meters of height, that plan on the air a bucle through which parade walking or dragging people’ multitude. Images work as a mirror of the constant citizens number that go through the atrium, politicians, civil servants, technicians and visitors that life give to the building and as a result to the European partnership. For Canogar this “permanent transition state wants to remember to the users and visitors obstacles, uncertainties and efforts that have been required to move forward in moments of transition and the satisfaction of discovering new paths”.

Unlike David Cerny’s facility controversy, during the Czech presidency, of a year ago, Spain has chosen a work that flees of controversies. For the State Secretary of the European Union, Diego López Garrido, the assembly is “an excellent way of seeing how Spaniards see Europe, as a constant crossing”.

González-Sinde has pointed out that “the fact of consolidating Europe as protective space of the cultural heritage all the same contributes to the reorientation of our productive model towards the sustainability and the intelligence”. In felt opposite has asserted that “the speculation to ultranza of the environment is not sustainable” and that “the social protection absence, as all discrimination way he, is not long-lasting”. For the minister “what hard is the progress and it what he lasts the innovation”.

Three priorities of the Spanish presidency in the cultural field are in the first place, “reinforcing the European cultural identity and to promote the cultural tourism”. In this field Spain “will collaborate in the creation of the Stamp of the European Cultural Heritage”. In the second place, the minister has emphasized “to promote the digital culture promoting a legal market and the digitizing of the contents”. Finally expects “increase the paper of the culture to the range of economic growth motor sports social, equipping him of a great budget”.

During the Spanish presidency two cabinet meetings will be celebrated of the EU. One of informal character, on December 31 in Barcelona, that will go preceded by a great meeting of the civil society and public authorities on the development of the culture industries in the European field. On May 11 will take place in Brussels a Council in which the contribution of the culture’s sector will be analyzed to the regional development and local.

Other important events are the inaugural Show of the Presidency in the Teatro Real of Madrid, the next day 8 with Tamara’s share Rojo and María Pagés. In Brussels, Budapest and Madrid a dialog will be celebrated with the literature on the part of 20 Spanish dressmakers, Belgian and Hungarian.

From 3 of February until May 9 will be celebrated in Brussels an exhibition dedicated to The Greco, remembering his oblivion until the Institution Free to Education revalued his work in 1908. Several concerts are considered in Madrid and St Ildefonso’s Actual palace in Segovia.