The A Chainza neighborhood, to another side of Noia’s Bridge, it has long history. Plucked from ancient on the trace of the Camiño Real, it was of the whole life place of step forced from outside of Noia. The new road in certain way edged it: and as a meander broken off from the routes of traffic the Chainza it was pushed suddenly against the maritime edge, and met restricted and isolated, but this saved it… 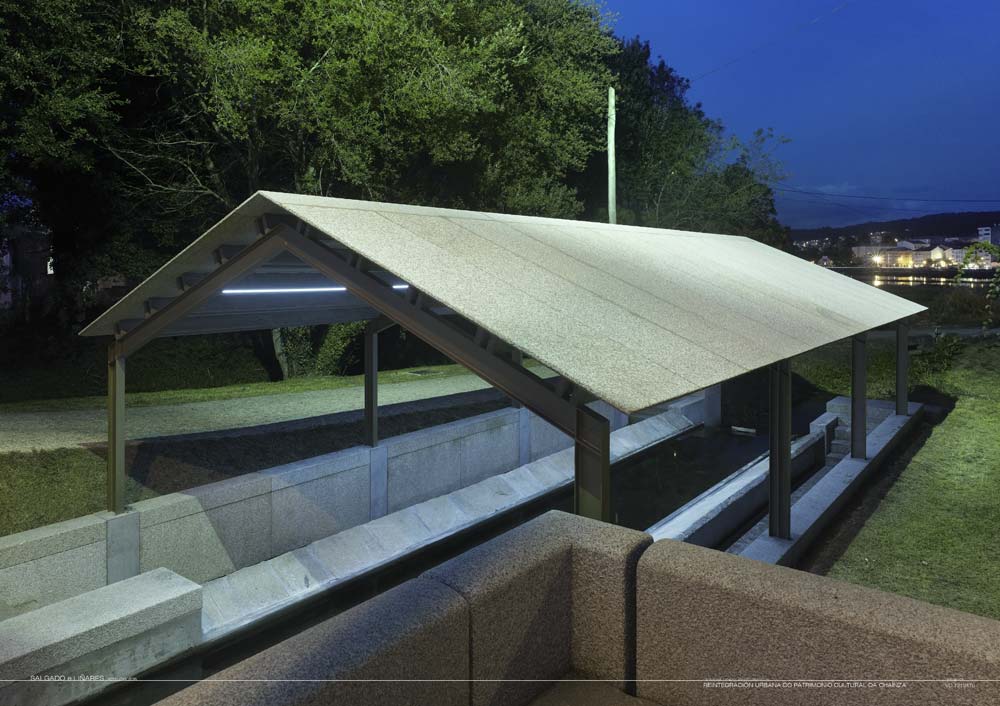 So A Chainza, in spite of his scanty activity, conserve a today the suitable scale, which him is own and gives him sense; his condition of decay is reversible, and his situation and character, present in the whole area, they make her deserving of better condition, that is to say, deserving of something more than her of limiting itself to being a ” short-cut for ready “.

This way the things, the intervention, which includes several phases and of which only the first one has been realized, has as priority aim return the public space to the persons, revitalizing it with a labor of cleanliness and retreat of the excrescences that the step of the years and erroneous decisions have added senseless.

This way so, our project of urban Reimbursement of the cultural heritage of A Chainza puts the accents in the following thing:

1. Retreat of the asphalt of the area and substitution for pedestrian pavement: granitic cobble of 5x5cm.

2. Reformulation of the edges and limits: the ” railing gives put ” it is the obliged reference; it is reinterpreted and even it re-formulates, in a constant and slow darn that extends the magnificent railing up to turning it into an inadvertent street furniture (since there is no other one in the whole area). The lighting, in addition, joins the “new” railing, in order to obtain a lighting low and adapted to the pedestrian characteristics of the area.

3. Redesign of the facilities urban and buried of the air ones: astride of both phases, since up to the moment there has been completed only the secret and low low tracing of the channelings. That is to say, the retreat of the posts and cables stays for the second phase.

4. Recovery of the tracing of the Camiño Real.

5. Recovery of the Medieval Bridge: the second phase contemplates his prolongation, in order to connect it with the “Camiño Real”.

6. Recovery of ” To Fonte da Chainza ” and of the Lavadoiro da Chainza. And this part deserves a comment apart, so the washer remains in perfect use. “To “activate” a space is literally ” to provide it with activity “. But the activity already exists; we just rescue her and revitalize her. Definitively, that the recovery of the lavadoiro is far from being a useless singing to other last times: an area of activity is, for this way saying it, or in other words, a social space.

And finally, the granitic stone of Baroña’s quarries, which presides at the whole intervention: from the small “lastros” of the pavement up to the magnificent slabs of 3m of the cover of the washer.

In end, it returns to breathe Chaínza.

Surface of the area of intervention: 4028m2