The project consists of the rehabilitation of a housing ground floor and two heights of the historical hull of Santiago de Compostela. 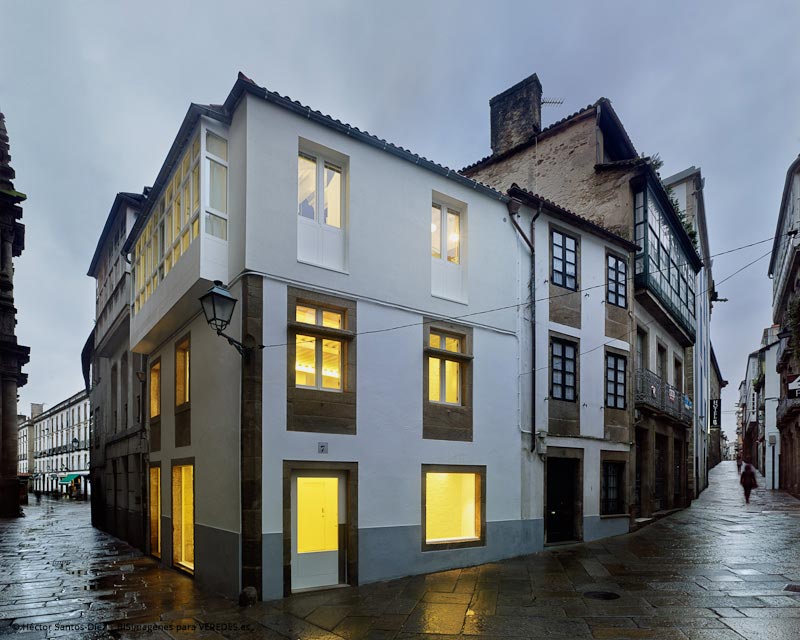 It is a question of the rehabilitation of a building ground floor, the first plant and the small one under cover in the historical hull of Santiago de Compostela. His two fronts finish off an apple between the Rúa San Bieito and the Rúa Santo Agostiño, in the area of the Colegio Mayor de San Agustín and of the Mercado de Abastos.

The building, which one was finding in an important condition of deterioration, is catalogued inside the Special Plan of Protection and Rehabilitation gives cidade historical of Santiago de Compostela, must remain the structure amble of the building as well as the composition of hollows of the fronts. The plan also contemplates the addition of the second plant as well as the creation of a gallery in continuity with that of the contiguous building.

As for the resultant volumetry, the addition of plant appears as a natural transition between the existing, stony and heavy building, and the new plant, more light and abstract. Without losing of sight the integration of the set but differentiating deliberately the preexistence of the new thing. In San Bieito’s front there are reproduced the hollows of the low plants whereas in the Saint’s front Agustiño the traditional gallery is reinterpreted in continuity by the adjacent buildings.

Internally it considers to put in value the stone of the existing walls of stone promoting the expressiveness of the structure amble. In the same way, the new horizontal structures, which are solved by means of girders and wrought metal-workers, also leave conference themselves.

To harmonize the set one chooses to paint all the structural elements seen of white, which also will help to create a sensation of luminosity inside the housing, minimizing this way the disadvantages of the north orientation of the house.

With this simple resource the structure receives protagonism, appearing as it is and providing to the housing of a very definite personality.

The different plants communicate by means of a metallic stairs of perforated sheet, also identical with white, which it will allow, by means of a lucernario in the cover, that the light should cross the building illuminating the low plants.

The program of needs includes a business premises in ground floor to which one accedes for the rúa San Bieito. Also in ground floor, acceding from the Saint’s Rúa Agostiño, one finds the front hall to the housing from which we will accede to the top floors. In the first plant we find the common zones that include lounge – cocinacomedor, bathroom and washer – tendedero. In the top floor both rooms and a bath are located.