The raised performance claims the recovery of the former housing of the doctor, and sanatorium, to turn her into Castrelo de Miño community center.

One organizes the whole functional program taking advantage of the surrounding one and the configuration of the existing building, arranging in the ground floor, besides the foyer of access, a mediateca, a workshop for rural women, bathrooms, and nucleus of communications.

In the first plant, besides the nucleus of communications, one dedicates most of the space to room of reading and library, realizing also a workshop for niños/ludoteca and a room of multiple uses for young men. 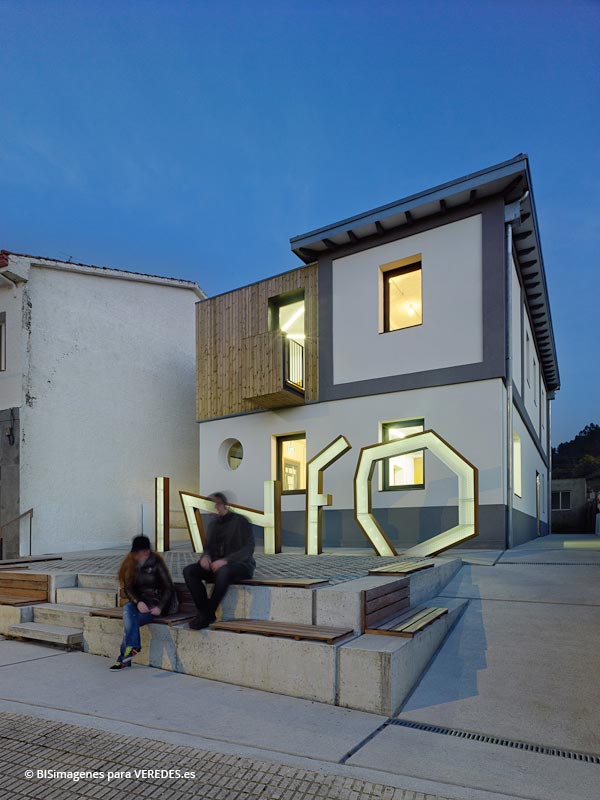 The central idea of the project is to create a modal to municipal scale, a building – square that articulates the environment of the principal route of  Castrelo de Miño.

There is looked a flexible and polyvalent space that, like spontaneous and alternative occupation of the street, turns into a new option for the different groups, as young men, women, children, readers, etc.

There is looked that geld. Info is, a node and social porous, opened, recognizable container for the whole community and that he invites at his entry as generator of different cultural activities.

To recover the character of the preexisting building was the point of item of the intervention. After a labor of investigation, investigating in the original traces and identifying the later modifications, the balance was chased between traditional materials and the employment of constructive current systems, simplifying the number of constructive solutions to obtain an intervention of low cost.

For the execution of soils, there was kept the sheet of natural iron used as element of allotment of charges on the structure.

The energetic rehabilitation was different of the aspects on which attention lent more, isolating the whole surrounding exterior one by means of a system of thermal external isolation, as in the space bajocubierta.

On a change of use having be realized, and due to the structural deficiencies in forged, there appeared the execution of a studding of reinforcement realized with profiles of laminated steel. For suplir the lacks ambles of the cap of compression of forged and of crossbeam, one arranged sheet of allotment of natural iron, which they support as the rest of the reinforcements seen as act of constructive sincerity.

In the nucleus of vertical communications the last section of the stairs is re-made, to allow his adjustment the new levels, and reorganize the access for users of limited mobility. To guarantee the fulfillment of the CTE, suplementa the existing rail realized in factory of hollow double brick, with the placement of a metallic frame of iron and boards alistonados of wood of pine.

Also an elevator interferes to guarantee the accessibility to both plants.

The basic premise in the design of the lighting is the employment of lights of low consumption, as lights LED in indirect lighting, for the emergency lighting and for the exterior and fluorescent lighting in elements of direct lighting.

By means of the execution of a light – element of signposting INFO, beside complementing to reading in the exterior space, the above mentioned center is indexed from the perpendicular route, even from the dependences of the Nautical Park. It has besides the function of element icónico, that allows to identify the easily above mentioned building.

In the exterior one installs an autoilluminated monolith realized in steel cut. Like graphical directory the functional program is identified of castrelo.info associating every use with his icon.

In the interior by means of the disposition of different logos, and texts of great format indicate the different dependences to themselves.

The respect for the original character of the building, marks clearly the election of the palette of materials, reducing it to the simplest form and looking for the balance between traditional and new material materials.

To undress the building of any superfluous coating is the point of item, to notice the genuineness of the intervention. In soils there will be kept seen the structural reinforcement of the cap of compression of the wrought ones and crossbeam in sheet of iron, applying a varnished transparent mate as protection.

In paramentos vertical interiors, on having effected the energetic conditioning for the exterior front, are kept the former walls ambles plasters, with the application of painting white color, with the exception of the mediateca where there is obligatory the blue corporate color.

For false roofs, beside making the structures of reinforcement visible by means of profiles of laminated steel, cork is applied projected to absorb the irregularities of the wrought old man, and to improve the acoustic conditioning of the different dependences.

The whole furniture of designs by the way for each of the spaces, trying to endow of unicidad the whole intervention.

For the different tables, and racks, a framework is realized in steel galvanized with profile 25x50mm on that the envelopes are executed, and you disable them with board alistonado of pine, with ended lasur transparent mate.

In the zone of access there is designed a bank formed by paneling of wood of pine, as zone of wait.

Of the same way diverse elements re-are in use recovered of of the demolition, as the former table of the office in sheet of iron, folding chairs and two banks of wood.

Urbanization and connection with the nucleus of Prado

One tries to open the building for the street, for which the preexisting walls of closing are eliminated. To facilitate the transition, it is chosen for the execution of a ramp that allows the access to persons of limited mobility, and for a square with zone of graderío.

The above mentioned steps obey the idea to move on the outside the different interior uses of the building, articulating the exterior graderío like small amphitheatre to realize scenic activities, monologues, workshops of reading, etc

Also to implement the above mentioned zone as with areas of interchange of books, or bookcrossing, the light and señalética furniture turns into a module for lending of books.