Reformulation of a public space: from street to square. Paving of the Praza do Curro | Salgado+Liñares

The Praza do Curro has been traditionally the principal public space of activity outdoors of Noia’s historical hull. The above mentioned activity, it demonstrates on the market of every Thursday and Sunday, has provided it with an exceptional vigor, incapable with everything of containing the constant and marked deterioration to which the square has met submitted in the latter forty years. 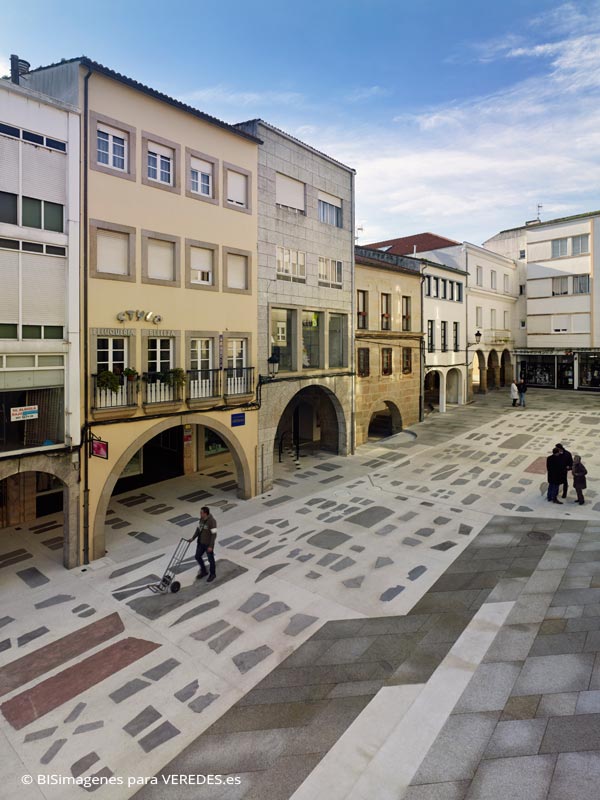 On the one hand, new and insolent buildings, all of them out of scale, have come to substitute great part of the traditional hamlet, for other one, the space has dealt with all kinds of unconnected pavements, finally, the cars they have colonized the space, which has developed more of the times into simple parking. That is to say, the area has ended in a set of unconnected remnants that it survives.

This way the things, already in the beginning of the project we understood that our intervention might not be neutral, that is to say, it should be realized by the due forcefulness, in order to be imposed to the vulgarity of the fronts. For fortune, we were possessing the magnificent proportion of the space.

The project, with the principal end of recovering the character estancial of the square, has approached in a principal way the following questions:

– Substitution of all the pavements.

– Resolution of the different differences and of the accesses to the buildings, and especially, of the access to the Coliseum Noela.

– Reinstatement of all the facilities and new tracing.

– Reordering of the traffic and definition of a fenced area of load and unload.

We were departing from a good number of slabs of granite to re-use, though very scanty to make it extensive to the whole area. And from the problem of the shortage the solution arose: a pavement of stone – concrete washed that beside gathering the architectural duality of the environment was presenting a sufficient personality as to be imposed to the deterioration of the fronts.

And the process was as it continues:

– We saw in longitudinal sense the thick slabs of stone, in order to obtain two faces of work that were allowing a correct meeting with the concrete. This derived in an endless number of double and symmetrical stones, that is to say, it derived in the individualization of every couple of stones, and in the introduction in the set of a welcome and surprising imagination. Likewise, the above mentioned process allowed us to re-use big slabs of casqueiros and remaining pieces of workshop, cut well with machine of disc – of maximum width 1,20m-, well with machine of thread – without limitation of dimension.

– We choose for a concrete realized in work with white and arid select cement, of different sizes and colors, black or white: four tones different from concrete and different textures according to the intensity of the wash.

– We made coincide the meetings constructions with the meetings retractions, in such a way that the alternate hormigonado was avoiding the later cut of the concrete.

– We reserve for certain areas a pavement of slabs of granite without meeting, to bone, in Franc contradiction with the rest of the pavement.

– We define a new perron of access to the Coliseum Noela.

– We integrate in the pavement, in his lines of force, the withdrawals of rain, with encofrados realized well with polystyrene, good with wood, which they were sending to the section of the steps of the Coliseum.

– We annotate a space for load and unload, in the entry from the Carreiriña, which liberates three quarters of the surface for exclusive use of the pedestrian, that is to say, of the persons.

The process of work has lasted twelve months and one has organized in two phases, the second one of them realized by administration, with employees of the Town hall. A marvellous experience that we would repeat gladly.

And to the bottom, the magnificent laudas of Santa Maria It Nongoes, that as the Macguffin de Hitchcock overfly the plot.