In the historical helmet of Ourense, poses  the reform of building between medianeras destined to study of architecture and to house unifamiliar. The basic premise of the intervention is to integrate in the surroundings, and try sobreponerse to the geometrical limitations of the edificación, pursuing the space continuity and the catchment of natural sunlight, by means of the interruptions in forged, double heights, employment of transparent closings, and some light and immaterial stairs. 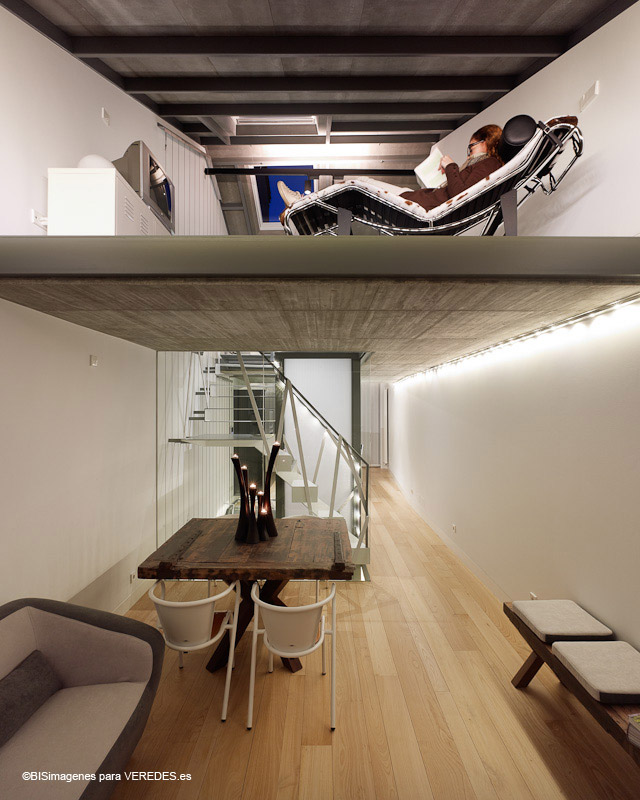 The building finds  in the historical helmet, by what the degree of protection did not allow variation any in façade. They kept  the existent carpentries, and executed  new carpentries to the interior of the façade in wood white colour, to guarantee the necessary conditions of confort. When treating  of an edificación situated between other two existent, and with a volumetry predefinida obligatoriamente, the game with the distinct inner elements will allow a fluent space articulation.

The starting point was the balance between traditional materials and the employment of current constructive systems, simplifying the number of constructive solutions to achieve an intervention of low cost.

Because of the risk of collapse of the walls portantes, especially the walls medianeros executed in mampostería, opts  by a mixed structure of profiles laminados of steel and losas of concrete macizas. For the two faldones of cover employs  a metallic structure and a forged formed by signposts sándwich formed by wooden boards cement and isolation of cork. Like act of constructive sincerity, all the elements of the structure keep  seen, applying an imprimación selladora on the concrete, and effecting a painted of all the metallic structure.

By the own configuration of the edificación, to the margin of the bands glazed in the forged to connect visualmente the spaces, the core of communications is the only mechanism to attract light from the cover. It poses  some stairs the lightest possible, formed by a sheet of iron of 8mm of thickness that folds  conforming the distinct stairs. For the definition of the rail, generates  some pasamanos luminaria, sustentados by a pletina of iron that folds  to serve of support. The pasamanos is formed by two pieces, a sheet folded upper, and a sheet microperforada of stainless steel that works like luminaria continuous. In the side of the stairs has  a continuous gardener that by means of some wires that visit transversalmente all the edificación, allow the incorporation of the vegetation.

The light will be a material more, studying in a bidirectional sense, from the interior to the outside and vice versa, being the basic premise in the design of the illumination the theatrical effect of claroscuro, and the employment of luminarias of low consumption. For the illumination opted  by luminarias LED, so much in direct illumination, as in elements of indirect illumination, and pasamanos. Like illumination of accent, in the zone bajocubierta has  a lane trifásico electrificado suspended, in which they connect  proyectores with optics superspot LED. In lines of continuous illumination looks for  tamizar the light by means of the placing of a sheet microperforada, generating an effect of diffuse illumination, with shadow projected.

opts  for reducing to the minimum expression the palette of materials, looking for the balance between traditional materials and new materials. In façade and medianeras keep  the paramentos pétreos existent, employing for the external carpentries wood in colour white. For the interior, in the zone of the study in low plant and in first plant, leave  the losas of concrete armed sight, applying them an imprimación selladora. The paramentos pétreos of mampostería paint  in colour white, and for the pavimento opts  by a pavimento autonivelante cementoso. The prism that engloba the zone of service, and the aseo of low plant  reviste with boards wood cement. For the area of house, keeps  the structure of losas of concrete seen, but opts  by finishings warmer, employing tarima wooden of chestnut tree of distinct widths and open board, so much in pavimentos as in revestimiento of any of the paramentos vertical, in bedrooms and bathroom. In the zone of low covered, keep  the signposts sándwich wooden cement and the

All the furniture designs  to purpose for each one of the spaces. With materials and elements recovered of the demolición, like the ancient door, executes  the table of the canteen and the piece of furniture of living room. The storage of the house, resolves  with a zone of continuous cupboard that visits all the length of the house, and that articulates  folding according to the different needs and the geometry of the house.