In San Clodio’s environment, in an area of patrimonial protection, there appears the recovery of a housing and of a building dedicated to warehouse with the only exterior front and with others placed between dividing. Since element articulador between the different buildings they operate two intermediate courts, one of them with an exterior stairs of double disembarkation and a terrace. One of the basic premises at the moment of confronting the project, was to support the traditional character of the building, her recovering environment to the interior court of major dimension.

In the ground floor, in the volume that shapes the stairs, one arranges a bathroom and a zone of laundry.

In the existing warehouse there appears a diaphanous space dedicated to library and zone of study, with a small mezzanine demolished that serves to solve the connection with the housing to top level by means of a covered terrace, beside lodging the racks of storage of books. The connection in ground floor is realized across a glazed corridor. To connect the plane demolished of the above mentioned stay with the zone of study, a stairs is placed on a channel of stone of the former press levitando on this one to connect both levels.

In the principal volume the programmatical organization consists of lounge of the zone most near front, a frivolous stairs that will join both plants and a zone of dining room and kitchen.

In the first plant one arranges the bedroom and principal bath, and later of the stairs, a polyvalent space with a preferential use of workshop of painting, which frees the previous stays of another bath and of the secondary bedroom, which is opened for both interior courts.

The integration is looked in the environment, and to try to recover from the geometric limitations of the building, chasing the spatial continuity and the capture of natural light, by means of the interruptions in the slabs, double heights, emptinesses and a light and immaterial stairs.

A great lucernario and to overturn to both courts the different stays they will allow to catch the natural light. 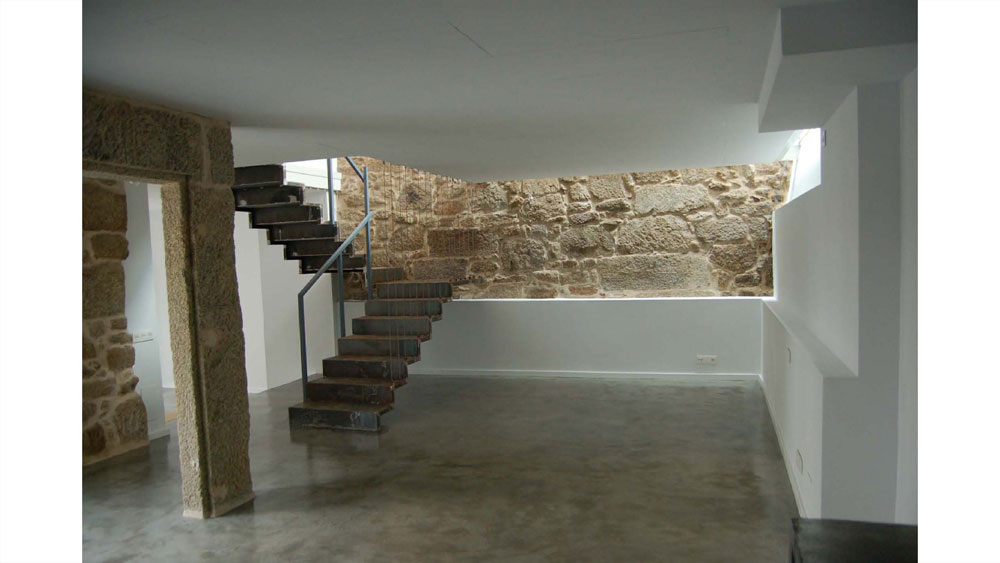 The building is in zone of Good of Cultural Interest, for what the protection degree did not allow any variation in the surrounding exterior ones.

On having treated itself about a building placed between existing others, with the only exterior front, and with a predefined volumetry necessarily, the game with the different interior courts will allow a spatial fluid joint, and the visual connection between the different dependences. To vent the zone of the court, there was modified minimally the geometry of the skirts of cover, to gain conference and to allow major soleamiento of the above mentioned zone vertebradora of the project.

Respecting the need to realize a reform of very low cost, the point of item was the balance between traditional materials and the employment of constructive current systems, simplifying the number of constructive solutions to obtain an intervention of low cost.

In the buildings on those who were operated, due to the risk of collapse of the walls ambles executed in masonry, it is chosen for a mixed structure of profiles laminated of steel and massive slabs of concrete.

For the skirts of cover there is used a metallic structure and an entrevigado realized by panels sándwich formed by boards of wood I cement and isolation of cork.

To demonstrate the real constructive nature of the reform, all the elements of the structure are kept seen, applying a sealer priming of white color on the concrete, and effecting the identical one with the whole metallic structure. The white is the necessary ally to try to gain luminosity in all the stays.

For the own configuration of the building, to the margin of the glazed bands in forged to connect visually the spaces, and the employment of double heights, the great placed lucernario cenitalmente in the area of workshop of painting, the majority of the stays overturn to the principal court.

In saying intervention is chosen to reduce to the simplest form the palette of materials, looking for the balance between traditional and new material materials. In front and dividing there are kept the stony existing paraments, wood being used for the exterior carpentries in white color. For the interior, in the ground floor and in the first plant, the slabs of reinforced concrete leave conference themselves, applying finished white color to them. The stony paraments of masonry a sealer priming is applied to them, and for the pavement it is chosen for a handcrafted pavement realized by burnished and varnished mortar.

Top For the floor it is chosen for ended hotter, there being used give of wood of chestnut-tree of different broad and opened meeting, both in pavements and in coating of someone of the vertical paraments, in bedrooms and bath. For under covered the panels ploughs kept sándwich of wood I cement identical with white color seize the whole structural perfilería.