To see, it closes the eyes | Miquel Lacasta

What continues is the product of a fortuitous meeting. A meeting, which like amicable confrontation, relates two parallel attitudes enclosed in the same space. I explain … 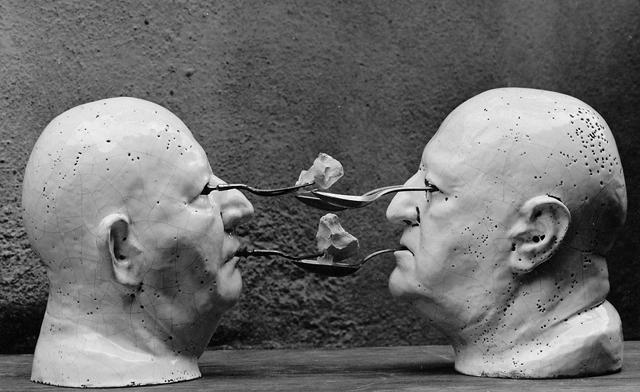 I have visited a par of times the new headquarters of the Film library of Catalonia in the Raval of Barcelona, of José Luís Mateo. The meeting with the forceful nudity of a building without concessions, rough in his rotundity already costs for a weighted reflection. Nevertheless to do critique objetual, to state the apparent successes and the meaningful diversions of a building especially I am not interested too much. In architecture in “what” I am interested less than “how”. It is more, it would not be able discipline my impressions, arrange them, them target and construct with it a reflection on a given object. There are others that already do it very well.1

Nevertheless the visit, the experience “in situ” of buildings and remarkable contexts continues being an inexhaustible source of architectural resources. The time that passes inside a good architecture, is always a time aleccionador, a bold and formative time, an intense and lucid time. A conscious visit, it costs neither any moment, nor any attitude to visit architecture, makes you a better architect.

Hitherto there is no mystery. I do not know any architect who does not collect visits of architecture.

My particular meeting in Mateo’s building was of another type. After a few hours of visit, of lost steps, of looks esquineras, I had the sensation, since with so many other buildings in that I am interested, that this one was a building to touch more than to see. There was in the whole brutal surface of concrete no intention of hiding the materiality. Of raw form, without coming to the violence but without observations of doubt, the building was appearing as what is, rugose space, smooth space, cold space, hard space, cutting space … What you see is what you get says the phrase when there is nothing to hide. Pero What do you get when you touch it?

On having finished the visit I had the habitual temptation of visiting the bookshop. The cinema and the architecture are not not so even distant relatives, are good friends, with much that to learn one of other one and in you cause even he would say that they are lovers, mixed up disciplines got involved in torrid idylls.

It was in the bookshop where I understood Mateo’s project in all his architectural dimension.

To see, it closes the eyes,2 is the title of the book that compiles the texts of the Czech filmmaker Jan Švankmajer, one of the teachers of the cinema of animation, with more than twenty-five shorts and five full-lenght films. His analogical animations, they are based on the creation of marionettes, collages, drawings etc., with special attention to what Švankmajer is called the tactilism.

Of entry already it is curious well that someone dedicated to cinema takes the tactile dimension as a central topic. In one of the texts of the book, Švankmajer, does a revision to his vital biography and the discovery of the tactile thing. In others he speaks about the tactile experimentation or about his sculptures gestuales. The aptitude to disturb and shock of Švankmajer is simply brutal.

Of the texts of the book, exquisitely published, there was one that in the typical reading in diagonal and hurried that we do before us a book stays, I make myself fixed. The text Decalogue published in the magazine Analogon number 26-27 of 1999.

Probably for always effective I claim of the word Decalogue, or simply for a half-full random of serendipity,3 I remained amazed on having discovered like simply with the substitution of the word cinema and all his variants, for the word architecture and all his declines, not only it had discovered a new dimension of Mateo’s building, but the deep dimension of so many fundamental buildings that he had visited previously.

The text, suitably manipulated and mutated4 to recount to the fact of arquitecturizar it sounds as it continues:

It records in your spirit that the poetry is alone one. Before starting projecting architecture, he writes a poem, paints a picture, do a collage, write a statement, a test, etc. Because only feeding the universality of the means of expression you will have the guarantee to realize a good architecture.

Be the complete submissive one of your obsessions. Your obsessions are, with much, the better thing that you possess. They are relics of the infancy. It is not a question of recollections but of feelings.

The architecture uses as if you realized a magic operation.

It takes the dream as reality and the reality for I dream constant. There are no logical alleys. Between the dream and the reality only there is a negligible physical movement: of persisting or opening the eyes. In the awake dream, this movement does not even exist.

The more you penetrate into a history propitiated by the imagination (here we might speak about the statement of the architecture), the more realistic have to be with the details.

It chooses always topics forehead which your position is ambiguous. This ambiguity must be sufficiently deep and irreversible as in order that you could walk on his summit without falling aside or to other one, or do it to both sides simultaneously. Only this way you will be able to avoid the worst of the crimes: to do an architecture of thesis.

At the end of this delicious decalogue, Švankmajer, ironically ends up by saying:

“The fact of formulating these ten orders does not mean that it follows them of conscious form. These rules are a consequence of my creation, have not preceded it. On the other hand, any order is there to be transgressed (not turned aside).”

I am sure that the authors of the architectures who more have impressed me would not agree with many of the points of the decalogue of the Czech filmmaker, but a slow and reflexive reading of these words applied to the architecture, they have the aptitude to open new readings for the fact of architectural, and are an invitation, it does not exempt of provocation, to see architecture closing the eyes and simply to touch it … to see, it closes the eyes.

Evidently it is neither Švankmajer, nor the first one nor the last one to speak about the properties of the tact “to “see”. I cannot stop mentioning here to Le Corbusier, where in his Poème de l’Angel Droit F.3. Offre (La Main ouverte) 1947-1953 he writes:

1 To see Jaume Prat Ortells‘ blog, a prodigy of critique desprejuiciada, simultaneously that rigorous, established in an encyclopaedic erudition.

3 According to the omnipresent Wikipedia, a serendipity is a discovery or a lucky and unexpected finding that takes place when another different thing is looked. Also it can refer to the skill of a subject to admit that it has done an important discovery though it does not have relation with what it searches. In more general terms it is possible to name this way also to the chance, coincidence or accident.

4 That excuses Švankmajer to me from just now … I Have left in cursive the words that I have introduced as action mutant, to leave witness of the brilliancy of the original text.

The molded one of the hands,

The sight that is inside the tact,

To full hands I have received,

To full hands I give.