In a small ship of the former slaughter house of Madrid, the ship 8 B, have withdrawn the tiles of a cover from themselves in poor condition, have been piled up and have interfered inside to solve a need. Hitherto there might come the summary of this intervention.

The slaughter house of Madrid was projected concerning 1907 and constructed during the second decade of the 20th century by Luis Bellido, municipal architect. During near sixty years it was working as great pantry of the zone I centre. Throughout this time it demonstrated too his functional virtues and his spatial qualities. More debatable it has turned out to be, as the years went by, the style applied to his fronts, very removed from the first approximations to the Modern movement that began to explore in this type of industrial buildings in Germany, Holland or France. From the eighties, the slaughter house moved to the periphery of the city. The small “industrial city” projected by Bellido fell down in the abandon and in the oblivion. For some years the town hall of Madrid wants to turn this complex spoilt in a cultural engine of forefront for the city. 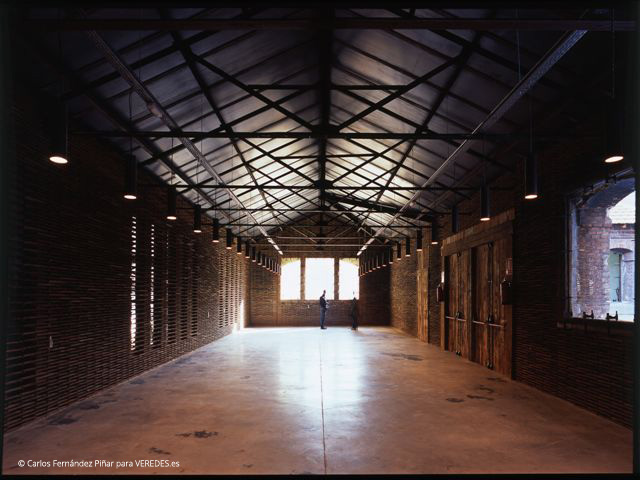 The ship 8 B will be the space destined for the administrative management. A small zone of work, a store and a polyvalent space for chats or presentations. Originally they were a few rooms of support for the storage of the remains produced in the ship 8, where the skins and the salting were drying off. A minor ship but of great spatial interest.

The priority of the intervention was to return a cover of flat tile on boards and rasillas successively patched, to realize a structural reinforcement of the set and to condition the interior, thermal and acoustic, to give service to the new uses. This process had followed previously in some other ships of the slaughter house and, as result of it, there were accumulated mountains of rubbles of tiles, logs, cobbles and slabs of granite, waiting to be moved to the dump.

I want to think that this project arose from the opportunity. Of having discovered an opportunity in those rubbles.

In the way of exploring all the reasonable possibilities, the constructive system turns into a project generator, into the place where it rests a certain ethical position before the rehabilitation, before the architecture.

How does that opposing object work? How does flat tile work? How is it piled up? How does it get ready? Which are his characteristics organolépticas, his weight? How do they join? These are some of you her ask that they appear in the process. The absence of some elements of the apparel produces lattices, the step of the light. Sometimes a piece informs for the walls, others, piece happens for the coatings. The problem of the corners, the lintels. The universal problems of the architecture appear. At the same time and with the same intensity the workforce and the blemish appear also. The blemish of the man and of the old thing, of the recovered. I remember an ingenuous order during the work: “Jose, twist that it does not matter”, and a response, a lesson of the manager: “I do not twist that of twisting always it will be time”. A work of many I fill of vibrations. The vibrations of the collective craftsman, of the craftsman that Richard Sennett claims.

As that cabin of the forest of the Swedish architect Ralph Erskine, in which it was piling up trunks to be protected from the winter rigor, this project also is bioclimático. Bioclimático because the tile contributes to the thermal and acoustic and sustainable comfort because it is reinvented by what has to his scope. It is bioclimático as the architecture of people, as these homes – chimneys redressed in ceramics that they find in the province of Soria.

It is an intervention that tries to respect a spatial valid configuration, without her committing adultery. It is a test of the power of the architecture as qualified container, independently of his uses, of the relating to the moment uses. A classic, eternal concept of the space, nothing to see with the classicism, not necessarily with Italy. Opposite to the style allegedly “national – pure” that Luis Bellido applied to the fronts, in this case, in the interior, the style is diluted, disappears as inheritor of the former School of Madrid. Order, opportunity, commitment, containment or clarity without any formal will a priori. An area for unknown me, beyond the project, beyond any intention. The protagonism of the architect gives a step backward, moves back from the architecture in time. The history is pendulous or spiral, if we her deal with three dimensions. This project undoes some crossed ways, tries to reach points of meeting. It advances moving back, as the rowers, looking backward, as was making clear Oteiza. Of the Arabic tile, proceeding from the thigh of the woman as mold, and of his manual placement, it passed to his industrialized application and to his flat version. Now the industrial, inert elements, they understand each other otherwise, descontextualizados and placed from the unpredictability of the manual work.

This project tries to understand the architecture as an intellectual, cultural, ethical experience. Not to confuse with a social or political positioning.

Budget of furniture: not contracted except the own ones of locksmithing the designed by the office and the included in the total budget.