The project of the viewing-point of the “Pedra da Rá” is an action based on the municipal program “Riveira Atlántica 2015” that tries to promote between others the tourist possibilities of Riveira’s town hall.

Inside this program there is designed the recovery of several viewing-points and between them one entrusts us the recovery and improvement of the viewing-point known as viewing-point of the “Pedra da Rá” which took a use as a viewing-point from the 80s, when a stairs of concrete was constructed to rise to the same stone and from there being able to observe the nature reserve of Corrubedo’s dunes and the horizon of the Atlantic Ocean. 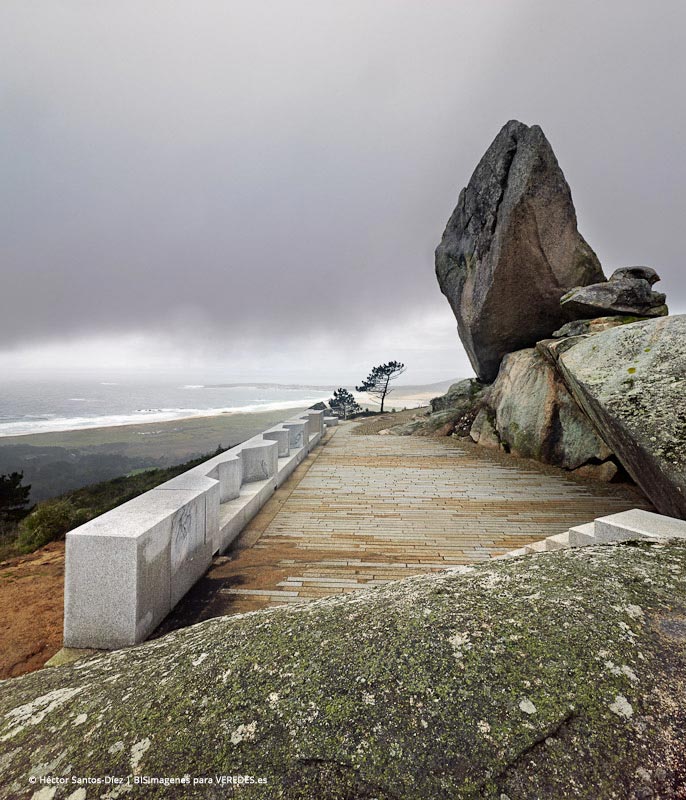 The offer of our project is based on an action first of cleanliness of the environment, with the demolition of the original stairs of concrete, as well as the wash of the rock and the movement of lands to recover the rocky original formation, of great plastic value for his geometric natural complexity..

As result of this first cleanliness, there appeared new rocky formations that the original project forced to restate and to manage to convert the project of a punctual viewing-point to the project of a space with conference of different possible orientations, but especially origin of possible tours in the environment, so much for his ecological value as origin of pedestrian very diverse tours, so much towards the next Celtic hopscotch – enclosed Castro da Cidácomo towards the nature reserve of Corrubedo’s dunes or towards a next beach.

Definitively the project has tried to reinforce the movement against the static thing and to recover the tactile thing besides the visual thing, achieving a set of diverse character where the nature is the protagonist and the architecture only his frame.

All the used materials, for the accomplishment of the stones and the arid necessary ones for formation of the different types of pavements in the different platforms, are local materials, fundamentally granitic stone wild type, which has his quarry of extraction located in I Carry do They are to less than 4 kms of the work.

Another important part of the paving, almost the totality of the take-off of the ways of hiking, has been realized by recycled slabs-pedra vella – of remains of other works and other one departs from the platforms with cobble and rolled singings equally proved from the recycling waste of demolitions of ancient constructions of the environment.

The plants them used for the formation of the vegetation, they are simultaneously plants type creeping – language of cat – located in the next mount – mount do geld – and replanted in the environment Pedra da Rá gives as a green mantle that helps to complete the sensation of natural space, but that without need not neither of irrigation, nor of maintenance, for his own botanical condition of this type of plants.

Definitively, one has tried to use materials of the zone and even to recycle cobbles and stones of other works-pedra vella – to be able to achieve simultaneously an action of low cost-42 Euros / m ²-and of great permanence that close to the type of vegetation proposed – creeping plants tapizantes – the resultant space will be in his set a place of great permanence and void or scanty long-term maintenance.

In his set it might say the project that it is of a high both ecological and economic sustainability.