Crowd Manifest: The company and the intelligence of the multitudes

Crowd Manifest: The company and the intelligence of the crowds, the new book that have written with Antoni Gutiérrez-Rubí with the coordination of Ricard Espelt inside ours project Laboratory of Tendencies. After the experience of 32 Tendencies of Change, decide us does a time to explore like the radical transformations that is experiencing our society affect to the business strategies. The scale of the changes and the new forms to generate collective intelligence are for us the two main reasons of the change and therefore we focus our work in the crowd.

Crowd Manifest publishes  in format of and-book and finds  available for free download so much in his web as in the main platforms of distribution. This available under a licence Creative Commons of Recognition – No Commercial – Share The same.

The project of book has suffered a complex process and reflects of some way the intellectual trip of his authors in the two last years. In Self-evident Crowd include diverse texts, reviewed and up to date, that publish previously in different spaces, in addition to audiovisual contents (many of them generated in the process of investigation and production that explain in How have done the book?). Each text has his context and his history but now purchase a new dimension when appearing organised with a common speech. We have ordered our arguments around 10 basic ideas (Indice): The five looks for the company of the today; A new paradigm: the crowdsourcing; A new vision for the company of the century 21; Design for a complex reality; The social technology; Stages for a distinct reality; Spaces and ecosystems for the innovation; The culture of the procomún and models of finance; A distinct approximation to the consumption; and professional Skills and innovation crowd.

In my case collect  the ideas and experiences that have marked my life in the last times in which I have been able to develop projects that have allowed me understand with depth by a part the business and social transformation to which assist, and by another the new models of education and emprendizaje. In both cases has interested me especially the paper that plays the innovation as well as the collective dimension of these processes (and the spaces and communities that involucran).

This project more than ever would be unfeasible without a small crowd that has accompanied us and has allowed us arrive much more far of what would be able by our own means and with our individual intelligences. Francis Pisani has collaborated with us realising a critical review of the book and writing the prologue, A turn to the world of the innovation, where connects his recent experience visiting the planet in search of the places and actors of the most diverse forms of innovation with the ideas that argue in the book. Besides Francis finalises giving us one of the simplest definitions and at the same time deep of enterprising:

With which arrive to the conclusion – do not know if Antoní and Juan – that undertake is a political value in the sense of the politics renewed, of the deep social transformation, the dynamic creator of future to which invite us participating in and with the crowds, with the crowd, as they say. 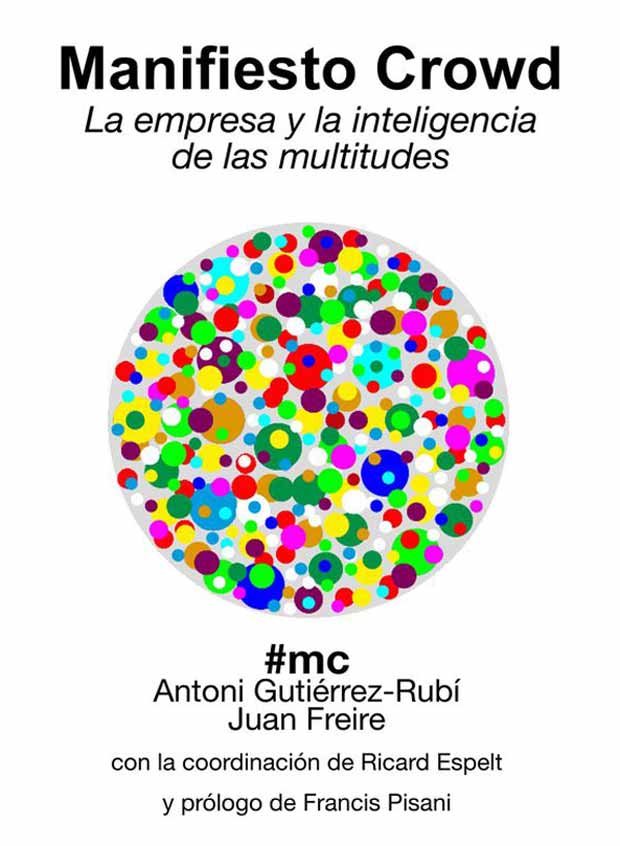 En el proceso de investigación y producción ha sido esencial el trabajo de Ricard Espelt y de todo el equipo de Toni en Ideograma. In the process of investigation and production has been essential the work of Ricard Espelt and of all the team of Toni in Ideograma. Besides Martina Minnucci has done us a big gift with the design of the cover that sintetiza visualmente ours conversations on the crowd. In my case besides, the contents that appear in the book are direct consequence of the stimulus, experience and dialogue that have allowed me work with diverse teams. For my has been especially important my more next surroundings in Barrabés Next, and in particular Carlos Barrabés, Luis Martín, Azucena Elbaile, Mai Quant and Xavi Loyal, in addition to many other people of the group Barrabés. On the other hand the book feeds  of my experience in education and emprendimiento in Teamlabs, beside Félix Lozano, Max Oliva and Berta Lázaro, working acutely inside the communities of MTA (Mondragón Tiimi Akatemia), TALN (Tiimiakatemia Learning Network) and Hub Madrid.

The book finalises with the “Self-evident ” Crowd” in shape of 66 sentences that besides are an invitation to participate:

If you think in a new sentence for the Self-evident can do us arrive your proposal (maximum 140 characters) road Twitter (with the label #mc) or through our page of Facebook (trying not surpassing this extension).

We think that the same exploratory character that has characterised the book in his phase of gestation has to keep later through this formula.