Make your own architecture fanzine

On the occasion of the exhibition ARCHIZINES in Otrascosas de Villar-Rosàs (April 12 – May 4, 2012), the continuous platform of activities eme3_ON throws a workshop for every person interested in producing his own fanzine of architecture. The subject matter will be totally opened always and when it turns about the architecture and the urbanism. Possible examples of topics to being treated might be the analysis on which it has to be the role of the architect in the current companies, the exploration of alternatives to the formalism, the debate on the architecture icónica, the analysis of the informal architecture and / or a summary on spontaneous reactions before emergencies. 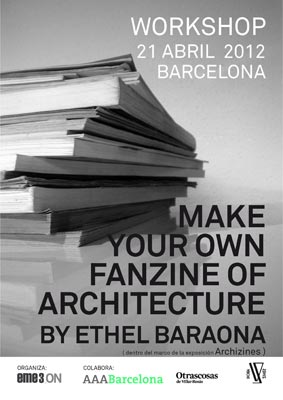 The participants will be encouraged to edit his own Fanzine of Architecture, having the possibility of choosing so much the format, the topic, as the tools and resources to publish his idea. Under the direction of the critique of architecture and publisher Ethel Baraona, the workshop will be carried out next April 21, 2012 in AAABarcelona (www.aaabarcelona.net – Great Route of the Corts Catalanes 694, Barcelona). The results will come presented during an event in AAABarcelona On April 25 at 19:30 and 3 better projects seránpremiados during the act accompanied of a cocktail and music. The workshop is a part of a program parallel to Archizines’s exhibition in the gallery “Otrascosas de Villar-Rosàs” (www.otrascosasdevillarrosas.com) in Barcelona, which will open from April 12 to May 4, 2012.

The Project ARCHIZINES celebrates and promotes the recent reappearance of publications alternative and independent from the whole world. Commissioned by Elias Redstone, and initiated in collaboration with the Architectural Association School of Architecture, the itinerant exhibition gathers a selection of 60 magazines, magazines and fanzines of architecture of more than 20 countries. Edited by architects, artists and students, these publications suppose new platforms to comment, to discuss and to investigate on the spaces that we live and the architectural practice. They are an important complement to the architectural speech and show the residual love for the printed word and the leaf of paper in the digital age (www.archizines.com).

Workshop Make your own architecture fanzine