On last 1 October the enrollment phase was initiated to the 4a edition of the International Prize VELUX 2010 for Students of Architecture, called by the Danish company VELUX, and organized in collaboration with the International Union of Architects (UIA), and the European Association for the Education in Architecture (EAAE, in his acronyms in English). The Prize is called every other year, and it will have the motto “in the current edition Light of Tomorrow”. It will not have categories nor specific sections, is already conceived with a global and only gaze. Participants they will have the opportunity in the Prize of analyzing freely the influence of the natural lighting in different aspects of the architecture: in the design of conceived buildings of individual way, in internal spaces or even in urban contexts and of city. Even students can analyze the light as an abstract concept. 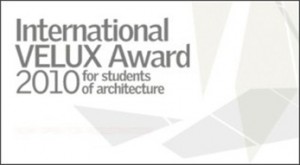 They Will be able to participate in the Prize all registered students in Schools of Architecture all over the world in the academic course 2009-2010. The enrollment term finishes on 1 February of 2010, and it has a resource of 30.000 euros. On today not yet the Jury’s members are known for the edition of 2010. The jury of the previous edition, that one of the 2008, was formed by Huat Lim, Michel Langrand, Enrique Browne, Eva Jiricna, Francis Nordemann and Hani Rashid.