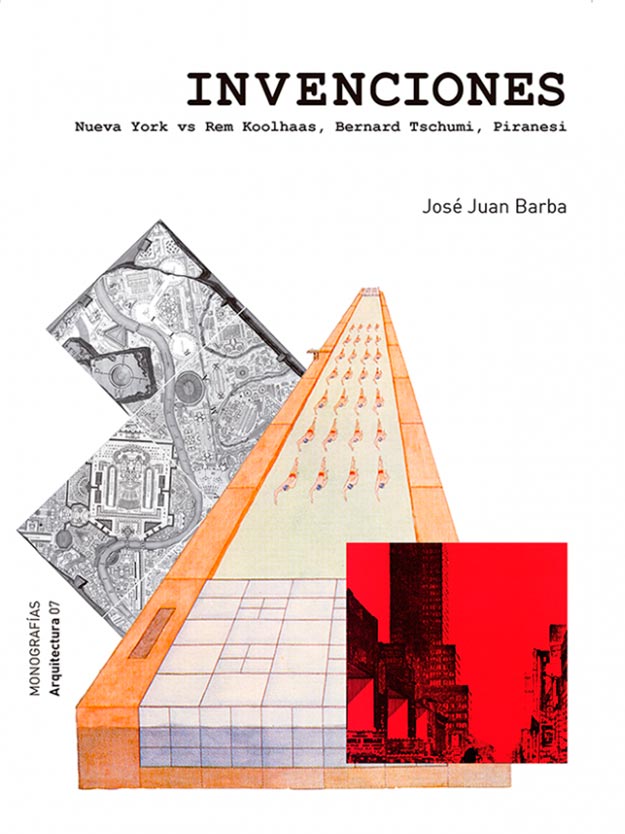 ‘Inventions: New York vs. Rem Koolhaas, Bernard Tschumi, Piranesi’ is the new book by José Juan Barba, an essay which looks into the texts, inventions, drawings and ideas of Rem Koolhaas, Bernard Tschumi and the great Italian engraver Giovanni Battista Piranesi, in search of new perspectives which broaden the way we see, think y make Architecture.

On ‘Invenciones: Nueva York vs. Rem Koolhaas, Bernard Tschumi, Piranesi’ José Juan Barba establishes a metaliguistic discourse which explores the relationship between the work and drawings by G.B. Piranesi and the graphic work of two of the most relevant architects of Cotemporary Architecture, Rem Koolhaas and Bernard Tschumi.

In contrast to pristine views and selective scientific approaches, the author seeks to present contemporary views of Architecture, sometimes retroactive, but always more complex, inclusive and nearer to reality and which include the observers, the users. In the author’s words, “a presentation of the Architecture of places, as opposed to the architecture of solids.”

Architect, professor and academician Luis Fernández-Galiano prefaces the book with the essay “Black Brains”, a very interesting reflection based on the title of an essay by Marguerite Yourcenar, “Le cerveau noir de Piranèse”, and which helps the reader to understand the complex context which surrounds the thesis. “Marguerite Yourcenar – the same one who described Piranesi as a ‘cerveau noir’ – would say that ‘l’oeuvre au noir’ is the necessary alchemical formula in order to pursue the ‘Great Work’, and that this ‘opus nigrum’ represents the tests which the spirit must overcome in its liberation process.”

“The late seventies were indeed years of change, and in which it is possible to imagine a great strain between a luminous and liberal Postmodernism which extracted its formal analysis tools from Nolli – many would shorten it to Wittkower, Rowe and Eisenman’s theoretical affiliation – and a sombre and radical Postmodernism, fascinated by Piranesi’s Carceri as much as by Surrealism or Constructivism, which would have Koolhaas as its most articulated representative and Tschumi as the one who introduced the situationist universe.”

In addition, architect Carmen Díez Medina introduces the book with a preface entitled “Creation of places”: “The few Carceri plates redrawn by Piranesi (1749 and 1761) are published here for the first time together with the preparatory drawings that preceded them. This rough sequence of three phases is intentionally used by José Juan Barba, not just to present an interpretation of space from the point of view of the observer – or not only – but rather to claim the value of  interpretation and metalinguistic criticism based on the representation of the spatial conditions in which individuals who are deprived from freedom live.”

“The contribution of unpublished material from MoMA and the National Spanish Library is especially interesting, all of it well indexed in the corresponding chapters.Its joint publication, along with other documents hitherto scattered, materializes this ambitious attempt to relate three discourses that are presented as three meta-languages. In this way, the author seeks to overcome the instruments which are most frequently used to talk about architecture up until the eighties, and offer a personal, conceptual, complex and kaleidoscopic reading of contemporary architecture.”

‘Inventions’ was the title of an exhibition held in Hannover in 1981 which gathered together graphic work by different architects  around the work of G.B. Piranesi. The drawings displayed here were not intended to reflect the pre-construction phase but to establish a metalinguistic discourse. The exhibition seeked to identify a non-textual narrative as powerful as the Venetian architect and able to suggest new points of view for architecture in a moment of crisis.

The bicentennial celebration of Piranesi’s death took place only three years before Hannover’s exhibition, in 1978. It revealed two different ways of understanding his work, a first approach that strictly referred to style and a second and more interesting metalinguistic interpretation. Besides, two of the books that best reflect our contemporaneity were published during this three-year period between both exhibitions: Delirious New York by Rem Koolhaas and The Manhattan Transcripts by Bernard Tschumi.

Just like Piranesi moved from Venezia to Rome, these two European architects went from London to the Rome of our time, Manhattan, in order to develop, exhibit and present a new way of understanding contemporary architecture in a time of crisis and uncertainty.

In Architecture, most of the views and discourses outlining what happened during this decade have been presented as negative processes: the end of Modernity or the consolidation of the stylistic disintegration that gave way to ‘Po-Mo’ or postmodernism. This book seeks to outline a different vision, far removed from pristine views and selective scientific approaches, that presents more contemporary views, sometimes retroactive and always more complex, inclusive and nearer to reality. Architecture visions which include the observers, the users. A presentation of the Architecture of places, as opposed to the architecture of solids.