The second edition of the European Prize of Intervention in the Architectural Heritage AADIPA, biennial contest organized by the COAC (Architects’ Official College of Catalonia) and AADIPA (Architects’ Group for the Defense and the Intervention in the Architectural Heritage), closes his inscription with an international participation four times major that in his first summons.

The number of inscribed projects, in this one his second edition, which reaches the almost 200 and coincides with his first summons, guarantees his stability and permanency. And the record of offices of 25 different countries, opposite to 8 origins that were assigned in the previous appointment, they ratify the international character of the contest that has as basic aim distinguish the good patrimonial practice and contribute to his spreading.

From April 24, closing of the period of inscription, until ends of May, the international juror formed by renowned experts in the area of the intervention in the Architectural Heritage, will carry out the task of valuation of the works that in each of 4 categories they compete for the prize. In the category To – intervention in the constructed heritage-, the architects Antón Capitel, Toni Gironés y Malgorzata Rozbicka will evaluate 117 projects. In the Category B – exterior spaces – the experts Joaquín Perez, Jose Luís Infanzón and Giuseppe Lonetti will analyze 32 offers. In the category C – Planeamiento – the professionals Antoni Vilanova, Sonia Puente Landázuri and Cristopher Graz will evaluate 8 projects and in the category D – Divulgación – Raquel Lacuesta and Michael Ángel Troitiño will study 27 works.

The failure of the juror will be announced On June 12, in the headquarters of the COAC of Barcelona and in the frame of the Biennial show II International on Architectural Heritage that from the direction of the Prize one organizes together with the COAC, AADIPA and the Autonomous government of Catalonia of Catalonia. The presentations and interventions of the day, which will culminate with the official ceremony of the delivery of prizes, will turn concerning the topic ” The architecture of the first half of the 20th century ” and it will possess Morocco as invited country.


The European Prize of Intervention in the Architectural Heritage AADIPA whose first summons were celebrated in 2013, arises from the conviction that in the current context, in which the architectural heritage besides a fundamental instrument of knowledge is considered to be a socioeconomic resource of the first order for the sustainable development of the territories, turns out to be indispensable the spreading, distinction and recognition of the works and qualit projects that they contribute to the preservation of the collective memory.

Directed by Ramon Calonge, Oriole Cusidó, Marc Manzano, and Jordi Porta, architects members of the group AADIPA, the Prize takes the will to be consolidated as catalyst and observatory of the new challenges that adds the globalization of the contemporary architecture, in the conservation and intervention of the constructed heritage.

The International Biennial show of Intervention in the Architectural Heritage AADIPA has the will to be constituted as forum common and opened of exchange of knowledge and of experiences, where to contrast and to know more closely the qualit intervention in the architectural heritage of other countries. 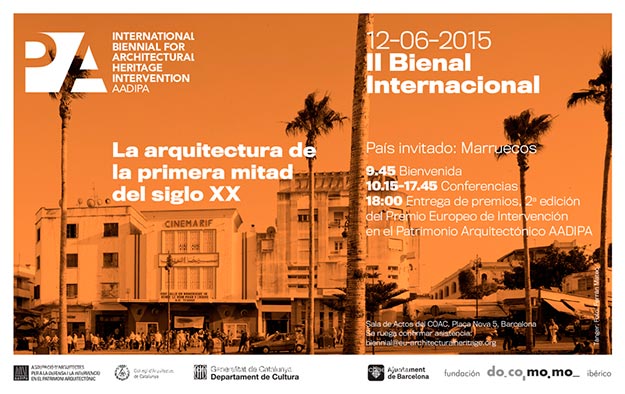