It is possible that the cabins between the trees have been in the origin of the project. It is possible that our barns also. We long for these moments of infantile games. The own configuration of the area accompanies us; in the middle of the park, isolated, between trees, area in earring …

The university campus of Ourense, northeast of the city, finds  divided in two parts by an avenue of six lanes with high intensity of traffic. The most urban zone occupies some ancient military installations reutilizadas as in so many other Spanish campora. To the another side the situation is more than urban park.

A project of Mangado, partially executed, incide in this approach; even with the burial of the vial to favour the integration between both campora and of these with the city, a significant increase of the vegetation and a more organic drawing of the routes. The piece that occupies us is one of the planned buildings in the new plan, and for now the only completed. It adds  to the already existent in this zone.

The faculty of right and economic, the elder of all they, with six plants and a print imponente. The central library, of Acxt. The swimming pools covered, of the own Mangado and a studient centre and official of Manuel Gallego, still in phase of project. 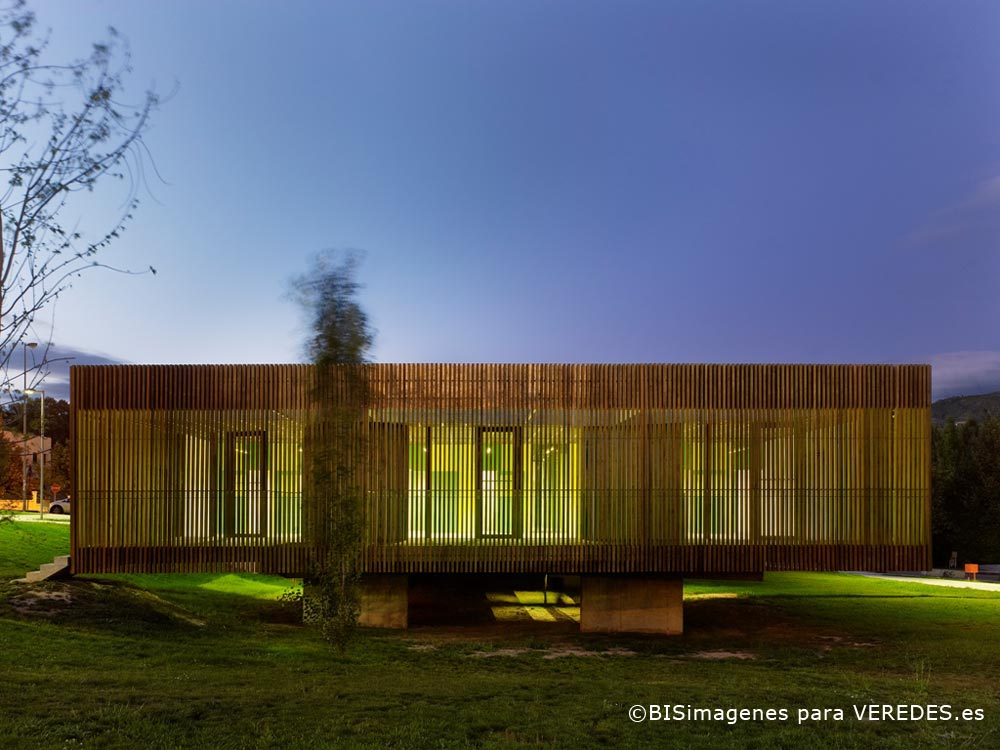 The kindergarten poses  in an alone plant by reasons of use and accessibility. The access in the meeting with the highest point of the terrain, to way of bridge levadizo, but fixed. Zaguán Enabled to leave the carritos and cortavientos enter us in the building, that organises  in five functional bands parallel. A room of varied uses delivers game; to the north, the spaces servers, with independent access; dispatch, changing room of personnel, kitchen and room of installations. A first filter with roperos and aseos, classrooms, and balcony-zone of southward games, dominating the university campus. The flexible closings between the classrooms allow different positions, from the total independence between them to the possibility of a conjoint room. The dodges in plant, added to the reflections of some mirrors and glasses, and the utilisation of similar materials in the interior and external favour the feeling of amplitude, in spite of the adjusted size of the inmueble.

Four screens of concrete abujardado support the building. They take absorbed the facilities of water supply, rain, reparation, electricity, telecommunications and geothermics, so significant the latter in the city of the Burgas. Two horizontal slabs, also of concrete, solve soil and ceiling. They take advantage of the necessary structural reinforcements to generate volumetric games in the seen parts, recollection of the supports (“tornarratos”) of the Galician barns. This way, the zones of meeting with the screens have major thickness, 60cm; 40cm the central slab and 20cm the flights perimetrales. Structural economy translated in architectural formalization with autochthonous reminiscences. The relative position of the building generates in section a low opened space, of sufficient height, capable of being used so much in time of rains like, especially, in the habitually warm local summer.

The closing front is of blocks of clay lightened of 19cm of thickness. The isolation is placed by the interior, constant, including soil and ceilings. Of this form thermal bridges are avoided. Plaster is finished off with trasdosado of carton in the vertical paraments, re-grown of mortar and linoleum in the soils and false acoustic ceiling of shavings of wood identical with the false ceiling. The cover is reinforced by another cap of isolation, this time over the slab, by a more habitual constructive solution. And it is finished off by stone chips of black slate between tapes that reproduce the broken interior divisions.

The exterior is revoked by water-repellent identical mortar of dark green. A lattice of wood of cedar treated with a hand of lasur, also green, wraps the whole piece. It promotes the abstraction of the piece on having acted as a veil that unifies his image. It tints so much the blind parts like the different types of existing hollows, windows to interior or exterior faeces, terrace, inlets, courts ….

The choice of the wood has to see with his controlled felling, his little I weigh, importantly in this case not to overload the flight precisely in top and his stability before the changes of temperature. The climate of Orense is continental, with thermal jumps that manage to reach the 40 º of difference between summer and winter, unlike the Atlantic band of Galicia, with a less marked contrast. At the time that he awards the final image to the building he collaborates in his conditioning, on having acted as parasol so much in the part blocks up like in the different hollows. The solar contribution diminishes from this form to the whole closing and a drafty filter is generated. The hollows in plant, and especially the central court, facilitate the generation of crossed ventilations, not only between fronts but also with the soil, which they allow the reduction of energetic artificial consumption in summer.The good orientation of the classrooms acts inversely in winter, on having favored the solar contribution. The situation of the terrace turns out to be likewise interesting, with the combination of the flight of the cover, the structure of support of the lattice, which allows the installation of tents in summer, but also of infantile hung games and the own lattice, with his contrast of lights and shades. The low part is protected by a glass rail to avoid the dangers of the possible contact of the children with a closing of wood placed in brute, without brushing.

They are chosen ended in green tones, color associated with the relaxation, but also with the park in which we are. The selected woodland collaborates with this sensation. A copy for court, slender all of them, putting his glasses out for the cover. The sensation, to three meters of height, is alike the one that we were describing to the beginning of the memory, of game between the trees. Of expired leaf, to reflect the step of the stations. The position of someone of them collaborates also in the reduction of the direct soleamiento. The theoretical plot is completed by other species, without solution of continuity by the rest of the park.