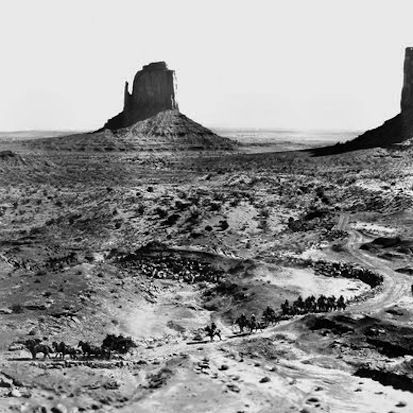 I confess an impenitent movie fan in his more strict definition[2], though also I can say the same of the architecture. I am also an impenitent architect. Chronologically speaking the cinema it came before so, since to the first love, I guard a special place and, as the architecture, it has made me happy and also big disappointments.

Though of the parallelism between two o’clock it has been said very much, I want to rest on both arts, since both are, to digress a bit on the creative fact. The two need big acts of creation and, though to carry out them it is necessary to have the concurrence of mas people, his point of item is individual. It is not that he denies the collective authorship in works of one and other one, but it is that I believe that the creation is an eminently individual act. One creates and two share. It is a way that it is necessary to cross with certain introspection. An individual way.

I enter so the trade of the craftsman that, as Ford or Lewerentz, they were aspiring to be mere professionals in it of counting histories or of constructing spaces. Professionals with a way of doing powerfully with what seemingly was a natural genius, turned into real artists of his trade that, by means of his clear and direct language, they themselves did not need to make be obvious and if his accomplishments and for extension his vision of the things. His work was speaking for them.

In an interview Humberto Eco was speaking to us about his conscious one and search ambiguity in order that the reader was finding his own interpretations of the history that it was reporting, with what it could leave certain ways the reader opened to lead his own statement and to establish relations. The Diligence or the Church of San Mark leak visual and spatial fullness and both count a seemingly finished history, but both hide more than they show and for it they are also deep and complex works. As any good work admit constant reviews that change depending on the spectator. In this sense they are also opened works.

Louis Kahn was saying that every work is an offering to the architecture[3]. It does not suit to fail to take advantage so of the opportunity. We face constant buildings that they propose to amaze more that to transmit. We are present at a panorama in which we have got used to confusing the architecture with buildings that do not honor her. Buildings that transmit without emotion, but with many image, empty or excessively light speeches and passengers. The works are occasions for the architecture, at the time that they must be transmisoras of pleasure, passion and emotion. Pere Gimferrer, in his prologue Arte Poética of Jorge Luis Borges[4] speaks to us about since the author teaches us to recognize the literature and not to confusing her with the books, objects always to the wait of a reader.

Both John Ford (1894-1973) and Sigurd Lewerentz (1885-1975), contemporary and long-lived creators both, was laconic in words. Of Ford it is enough to see someone of his interviews to state it and of Lewerentz … you upset nothing. His works are not a fruit of conjunctures passengers. They speak for them without need of explanations and, though from them they have not got away themselves, we can imagine them smiling before such attempts, forgetting that what both created was a direct product of a trade, of a way of seeing the things, of a way of living. Between Ford and Lewerentz the thing is.

[2]  ” That one who perseveres in a habit or who is obstinate in the sin – that perseveres in him without repentance “. RAE Dictionary