Communication, politics and company are three axes across which there is put into practice the methodology of analysis Bottom-Up. Of there that the debates programmed inside the seventh edition of the International Festival of Architecture Eme3 (that is celebrated from June 28 to July 1 in Barcelona) turn concerning this system of work. The essence of the Bottom-Up is the urban strategic and transverse action, across which there learns a process of creation and construction of an environment decided together.

The first one of the debates that will be carried out in the Eme3_2012 will be Thursday, the 28th of June, at 20 hours, in Eme3 Plaza. Under the title of Communication and Bottom-Up, incident will be done in the importance that the collaborative practices are acquiring inside the architectural speech and town planning. With Ethel Baraona as moderating, and Edgar Gonzalez, Nerea Calvillo, Alpaca Gonzalez, Koldo Lus, Tiago Mota and Ariadna Cantis in the table of debate, will share opinions and points of view on this revival of the civil initiatives, fruit of the financial crisis and current politics. 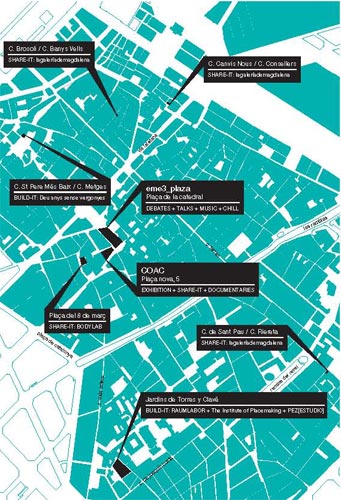 The technological advances have placed us in a new age of the communication, in which already they are not only the mass media those that generate information for the citizenship. Immediacy and infinite spread of the information are attributes that associate of form inherent in the nature of the social networks. Has moment come from that the architecture also extracts profit of the communication and the bottom-up for the construction of spaces more in agreement with the needs of the company?

Friday and on Saturday, at 20 hours, in Eme3 Plaza the debates will take place Processes / actions. The context, the moment and the debate moderated by Ramon Paramon (Friday 29) and Santi Ibarra and David Juarez (Saturday, the 30th). On Friday Gaspar Maza’s participation is confirmed; Santiago Cirugeda, n’Undo and Axel Tim (Raumlabor). On Saturday they will control Diego Peris (Everything for the practice), LaCol, LaFundició, Institute of Place Making, Expanded Architecture, Recreant Cruïlles, Laia Torres, Marc Dalmau and Collectif.

During two days there will be debated some questions that arise about the concept Bottom-Up applied to the architecture, as the possibility that the spirit of automanagement that is in the habit of inspiring the processes of spatial appropriation is compatible with the policies of the administration.

Also there will be studied the capacity of negotiation of groups and civil associations by the political estates that urban development models execute. In the context of social twitch that surrounds us, the administrations start appearing the policies of participation as dynamics of work. Of there that the professionals of the architecture and the urbanism rethink also his role in the development of projects related to the dynamics of speech and civil scout.