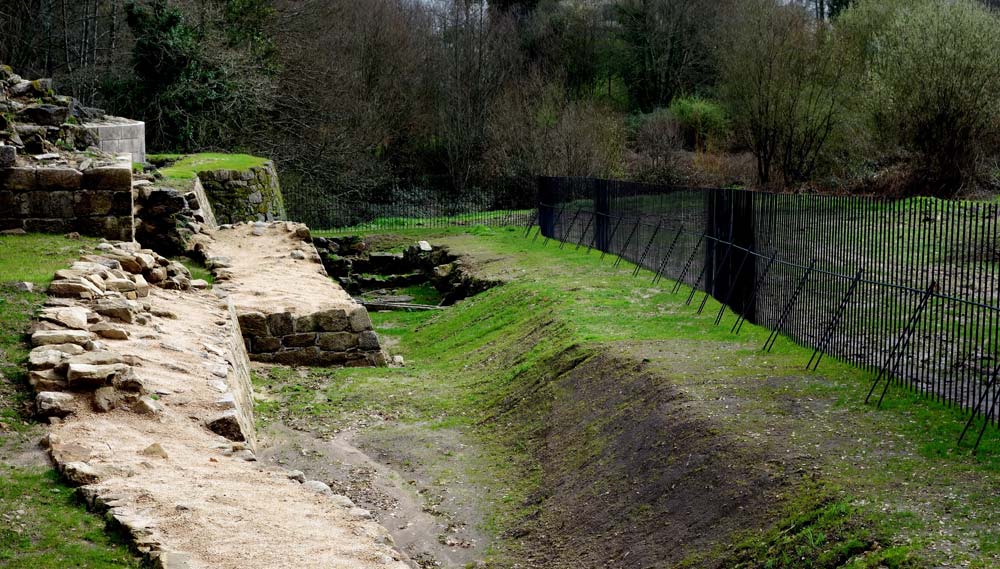 The castle of was constructed Rocha concerning the year 1240, during the episcopate of the archbishop Juan Arias and was destroyed in 1467, in the second war Irmandiña, in times of the archbishop Fonseca’s Alfonso II.

The history of the A Rocha Forte castle is intimately tied to that of the city of Santiago, being a scene of some of the most important events happened in this epoch. Two hundred years in which the strength of A Rocha was in foot were an epoch of great social convulsion for the city of Santiago, marked by the tensions between the power of the From Santiago de Compostela Miter and the increasing urban middle class rested on certain sectors of the nobility, which would end in the revolts irmandiñas of the 15th century, during which his destruction took place.

The realized work consisted of the production of the closings and cancillas exteriors of access to the deposit and the design of a series of informative panels that spread the origins, the historical context and the original function of the former Castelo da Rocha.

The above mentioned closings did not have to have so much the mission to form a physical and visual effective barrier that blocks the persons’ way and animals to any cost, but rather establish an element of delimiting of the deposit, of dissuasion and sign to regulate the visitors’ access. For the persons, the closing defines a limit between this archaeological space tidy and safeguarded by the public administration and the rural surrounding space, allowing simultaneously the general vision of the perimeter of the deposit.

It is also a follow-up of which one is acceding to a public property and of patrimonial interest, which use and enjoyment for the whole community in the due conditions depends largely of the own use that his visitors do of him.

The closing establishes fundamentally the limit towards the sides south and west of the deposit, remaining this protected in the north side for the own routes of the railroad and in the this side for the structure consolidated of the wall of the former castle.

It is formed by rods of steel of circular section of 20 mm, with a separation between axes of 15 cm, that arriostrarán transversely with pieces of the same diameter.

A physical barrier is established this way to prevent the uncontrolled access to the deposit that nevertheless allows also, due to the small diameter of the bars and his dark color, the contemplation of the remains of the castle.

Two doors were constructed to regulate the public’s access to the deposit and to allow also the entry of vehicles of maintenance, these are constructed of form similar to the closing, so that when they are closed they establish a continuity with the rest of the fence.