The V House consists of the rehabilitation, adjustment and the extension of an existing housing of vacations, realized to beginning of ‘ 60. The family that lives the house goes more than forty years spending the vacations in her and, in these years, the number of members of the family has been growing but the house has remained equal without being able to fulfill the current and medium-term needs.

The intention of the project is it of realizing a house for a complete family. A place where there could enjoy his vacations three generations of the same family simultaneously.

To obtain this intention, both younger generations will live the extension, which consists of a lateral wing articulated with the former building of his edge North-East and which cover uses as garden deprived to the current housing as landscape response to the existing topography.

The original housing shelters now the stays of social and familiar interaction, and also the bedrooms of the first generation. Every member of the family will be able to have his independence but forming a part of the only set. 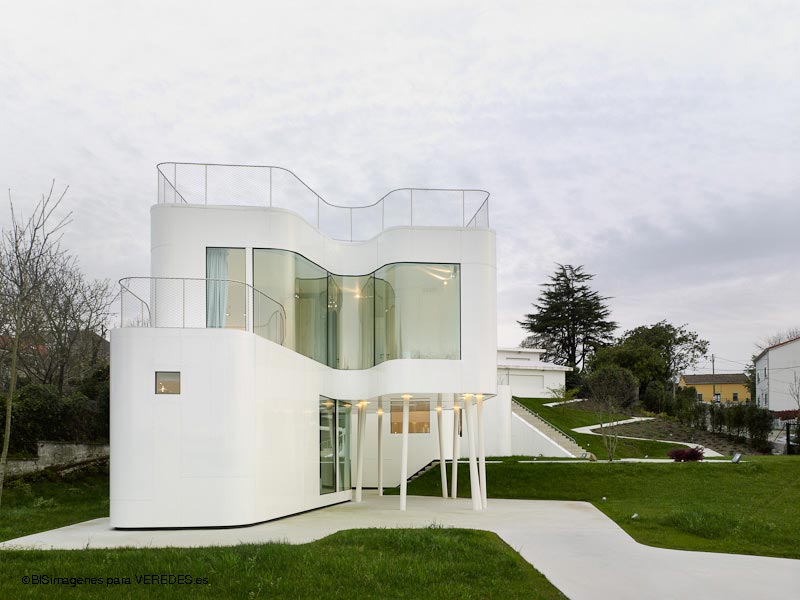 A wall multigelds defined by the only constructive detail, which uses both as structure and as thermal and environmental coat, winds to embrace the different events that happen in the house. The spaces are defined on having arranged the matter in the space time, and this one adapts topológicamente what happens in his interior. The new housing is formalized for to pass I continue of in a neutral bundle – without edges, without color, without texture – where the life, the action, is the protagonist.

Adopting the “exergía” as a combination of strategies (exergía = useful energy) between the needs of use of energy and architectural specific solutions, minimizing the costs of maintenance and optimization of performance exergético of the building. The thermal isolation is placed in the exterior of the external rind, adhered to the wall of concrete that provides the thermal inertia of mass in the interior.

In case of the system of landscaped intensive cover, which not only integrates the building in the existing ecosystem, also it adds to the building an important additional, both thermal and acoustic isolation, to the thermal inertia provided by the concrete of the slab. The building incorporates a system of natural warming of the interior from the disposition of the windows, as reintepretation of the glass galleries of the vernacular architecture of Coruña.

On having changed the position of opening due to I wind of the wall, there is received a major number of hours of solar incident, allowing the natural warming for greenhouse effect, which in this geographical situation, Corunna, is of great energetic sustainability. On the summer station this effect generates the movement of the air for difference of pressure and crossed ventilation. The house also has pipes of emptiness as for solar system, which reduces considerably the use of conventional fuels.

Though originally the project was possessing a wind additional generator to generate additional electric power, it was possible to do without this one for the set of passive applied solutions.

Type of Order: Preliminary design, Basic Project, of Execution and Direction of Work.