Once more, we open the period for the submission of projects to take part in the 7th edition of eme3 Festival that will be held in Barcelona from June 28th to July 1st 2012 in COAC (Official Catalan Chamber of Architects) while the exposition will remain open until July 15th. 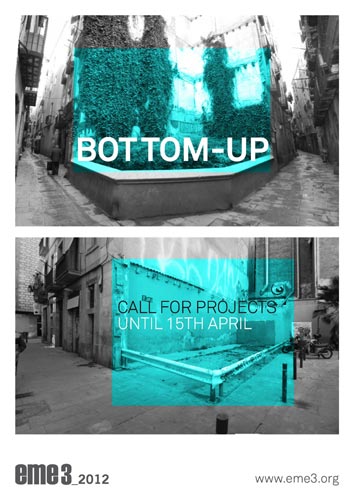 The topic of the 7th edition of the International Festival of Architecture EME3 starts from an exploratory analysis of the application of the concept “BOTTOM-UP” in architecture and its relationship with society. When we talk about a bottom-up approach, counterposing it to the top-down, as the name suggests, it means starting with the detailed design of the individual parts, to afterwards link them to form larger components who will end up conforming a complete system. Strategies based on bottom-up information flows are potentially necessary as they are based on the extensive knowledge of all variables that may affect the elements of the system.

In a changing environment like the current, where the foundations of our system are constantly questioned and challenged, a series of actions, which to date had a fairly minor implementation in developed societies, emerge now strongly, relying on creativity and innovation to fight this moment of crisis and uncertainty.  Eme3 wants to give support to these initiatives originated through and with the civil society, and has decided therefore to enhance and promote bottom-up approaches in the two modalities of the call for projects.

What is the objective of the call for projects:

Following the philosophy of eme3 to give visibility to emergent creatives and innovative proposals, we are launching a call for already built, in process or to-be-built projects that go in the line with the theme of 2012 BOTTOM-UP, and that might be presented under two modalities and in different formats:

It aims to show both realized and to-be-realized projects, in the format of a panel, a small scale prototype, a video, web and interactive application or any other volumetric format that may fit in 3x3x3m and will be produced and installed by the participant. The originality of the proposals and the presentation will be an added value for the selection criteria, therefore we make a call to the creativity and inventiveness of the participants. Eme3 will be in charge of producing the material in the format of a panel according to the measures that’ll be communicated by the organization, whereas all the other materials will be produced by the participating team.  Those proposals in a volumetric format will be exposed in the exterior space, in the open, which shall be taken into account by the participating teams while designing it.

We are opening a call for ideas where participants can submit proposals for the use of abandoned or degraded sites in the District of Ciutat Vella in Barcelona. The purpose of the call for ideas is to encourage the creation of spaces that give character and singularity to the neighborhood and facilitate the appropriation by the neighbors of the vacant lots in a participative bottom-up process, in order to allow the spaces recover their utility and maintain a certain dynamism and evolution over time. We have located several sites and/or corners in the District of Ciutat Vella in which it would be possible to work (see some examples of the sites in the annex (pdf)). Projects can be either focused like a direct intervention in any of the detected spaces or be presented through the realization of methodological proposals: workshops or construction of participatory processes.

Projects may have a middle or long term duration, following the ultimate goal of providing solutions to the degradation of unused or underused spaces in the District of Ciutat Vella in Barcelona. The Jury will choose a maximum of three ideas to be constructed or implemented during the Festival. The sites that are listed in the annex are a selection of the detected spaces in Ciutat Vella, whereas the winning proposals may end up being implemented in different spaces to those they were designed for.  Eme3 will support the realization of each of the proposals with a quantity up to 2.000 euro per project, understanding that any cost surpassing this budget shall be on the participants account.