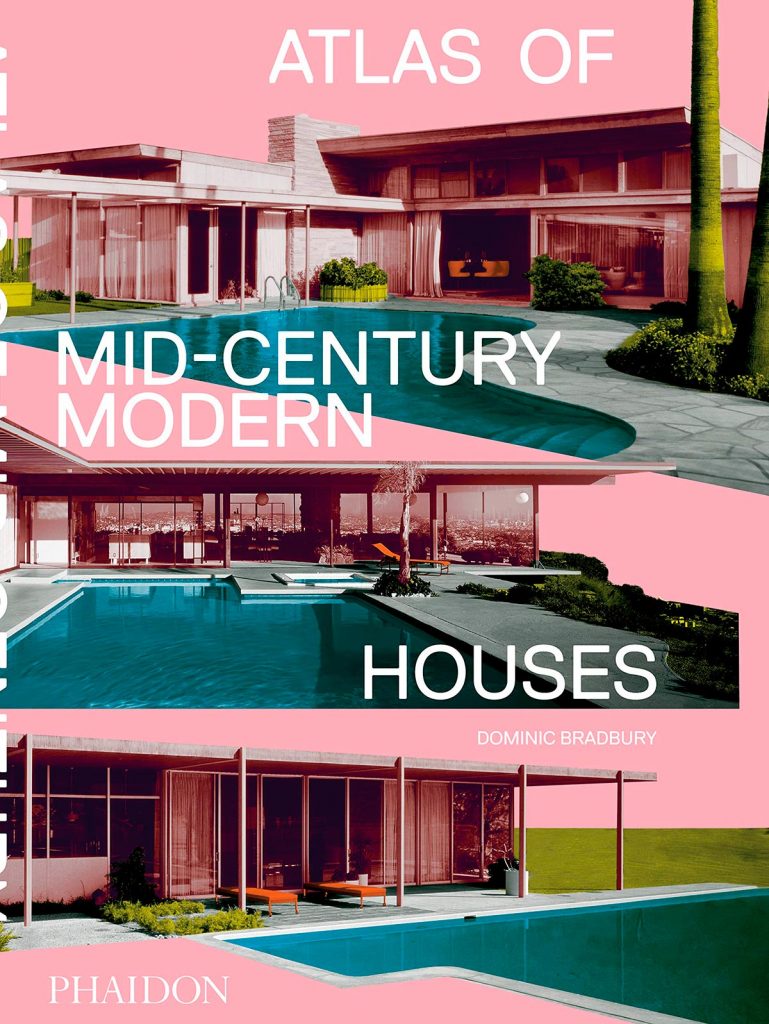 The most varied study on American modernist houses, with the best examples of this popular architectural style worldwide.

The Mid-Century Modern (American architectural modernism) is one of the most celebrated architectural styles of all time. Frequently characterized by open spaces, swimming pools, sunken living rooms and masonry fireplaces, this golden stage of architecture and design is especially linked to the West Coast, but we can find extraordinary examples all over the world. Following the publication of Atlas of Brutalist Architecture (2018), Phaidon’s bestseller, Atlas of Mid-Century Modern Houses is an exhaustive and global look at one of the most popular styles of architecture.

With 400 houses of 290 architects, Atlas of Mid-Century Modern Houses presents some of the best creators and houses of the twentieth century. Some examples include the Philip Johnson Glass House in New Canaan and the Farnsworth House of CT and Mies van der Rohe in Plano, IL, which took diaphanous spaces and transparency to new extremes. Also included is the Kaufmann House of Richard Neutra, in Palm Springs, CA, which embodies the modernism of the Californian desert; the Canoas House, by Oscar Niemeyer, in Rio de Janeiro, Brazil, which embodies Latin American regional modernism; and the Muuratsalo house, by Alvar Aalto, near Helsinki, Finland, which exemplifies Scandinavian “soft” modernism.

The book is geographically organized in nine global regions. Covering 40 countries, this volume shows that the Mid-Century was and continues to be a truly international phenomenon. While most of the projects are in the United States, United Kingdom, France, Australia, Spain, Italy and Germany, there are lesser-known examples in surprising places like the Democratic Republic of Congo, Cyprus, Ghana, Sri Lanka, Iran, Tanzania and Uruguay. Elegant world maps and chapter introductions facilitate the discovery of new regions of American architectural modernism.

Atlas of Mid-Century Modern Houses includes 600 photographs, with black and white and color archive images of important 20th-century architectural photographers such as Marvin Rand, Ezra Stoller and Julius Schulman. The images illustrate residential exteriors and interiors with furniture and lighting of some of the best designers of the time, including Gio Ponti, Charles Eames and Eero Saarinen.

Each entry is accompanied by attractive images and a brief and enlightening text about the history of the building, the architect and its main features. Symbols offer a quick and simple reference to describe its status (good, standing or collapsed), its use (in use or unknown) and its status (cultural heritage or planned demolition). Unfortunately, 19 houses included in Atlas of Mid-Century Modern Houses no longer exist and two will be demolished, but 62 are considered cultural heritage, a clear indicator that the Mid-Century style is still valued and preserved.

With an elegant design in large format and an incredible and colorful touch cover, Atlas of Mid-Century Modern Houses is the most complete study existing today, a must read for architecture buffs and fans of this highly valued style and a source of essential inspiration for life in the 21st century.