From 17 to 21 February was held in Madrid the 29th edition of Arc. During these 5 days (two of them open only to professionals) we’d the option of see nearly 3,000 artists grouped in 218 galleries. On this occasion the city of Los Angeles (LA) with 17 galleries has been the guest of honour

The event’s hangover has left very differents conclusions and impressions. The fair has already started with the controversy between gallery owners and organization concerning the large space between booths and the number of participants, that have been cut nearly half dozen in the last two years. Some of the gallery owners, ironically, proposes a football match between stands. On the other hand, has been the impression that the fair has been somewhat watered down, in some of the news about it is talk that this was the most classic edition but without much presence of classics such as Picasso, Dali and Warhol.

From a commercial point of view and with all the attention deposited on the crisis, Luis Eduardo Cortes, IFEMA director, speaks, without providing objective data, that have exceeded sales expectations. And all without works with high prices, the more expensive, a troubling portrait of Francis Bacon to price 1.6 million. The buyers were used to pay a more modest amounts for the works exhibited, serve as an example the 50,000 Euros that a Belgian buyer paid for “Starway to Heaven” the most controversial work of this edition.

Pending as ARCO and IFEMA both address some of these and other questions on the future of the fair. We will focus on remembering the most interesting of this 29th edition.

Once arrived at the Ifemafairgrounds, we headed to Hall 10 which together with the 8 and half of 6 is the chosen place to celebrate this year’s ARCO. Apart from General Program and the Panorama: L.A. also the organization made a bet on the most disruptive art through their art programs: Solo Projects, Expanded-box CinemaLoop and Performing Arco. In this latter sections are 30 countries represented with more avant-garde proposals, emphasizing the use of video and installations on the other hand have been missing from the overall program, with abundant photographic creations.

In this space we thirty-four artists display works with higher-level discourse, conceptual and very experimental. Two good examples are: Romuald Hazoumé and Peter Belyi. The Aliceday gallery, presents “Exit Ball” a giant ball constructed with pieces of container, used to smuggle oil from Nigeria and Benin (country home of the artist). This work symbolizes the ball of the next World Cup and wants to call attention to the excessive investment made by the government, in this event, in a country with a high poverty rate.

The sculpture “Silence” hangs from the ceiling, of the stand of the gallery Barbarian in the form of large star, made with wooden stakes. The raw material is chosen for the artist used and dirty, to better express the condition of fragility and instability of modern man. In this work the artist talks about the stress, constant aggression and pressure, coming from the outside world for cause an explosion, which stops in time and space of the consciousness of each of the individuals.

Diversity and dynamism would be two of the principles that define the current creative scene in LA, turning the city into a world reference in the art market. On the premise of giving it to Madrid with some of this cultural vitality, have selected 17 galleries that have been invited to ARCO. This cultural proposals have been completed with exhibitions, performances and an stimulating, film program that leaves IFEMA facilities and it floods the city.

The commissioners, Kris Kuramitsu, and Christopher Miles, emphasized that this section of ARCO includes large gallery, but is about great artists. Likewise, when discussing the selection of works refer to “search focused on the vitality in all its forms and be as faithful as possible to the idea of drawing a city that never leaves to amaze and never succumbs to a totalizer vision”. True to these words have led to ARCO artist as; Ed and Nancy Reddin Kienholz, Rebecca Campbell and Pearl C. Hsium or Dean Sameshima.

In what the organization calls a general program, we have chosen works by controversy, by the innovative or by the surprising, it have drawn our attention. As in all selection there are many and equally interesting works that have remained outside.

“Starway to Heaven” is just one of the works that Eugenio Merino presented in this exhibition, but for the Israeli Embassy is an offence, to the point of having signed a formal complaint where the embassy expressed its discomfort. This sculpture of three monks who show their different ways to approach your God, has helped the DNA Gallery to have the stand with the greatest number of visitors watching and photographing the work, which at 3 minutes into to start the fair was sold.

Carlos Aires, shows in the gallery Sandunga, his work, he has been used as vinyl and notes. The vinyls are transform into strippers and bulls as an ironically way to talk about Spanish topics. The notes of 20 and 50 Euros, are cut shaped in songs and figures, all into a very rocking style.

The Aicon Gallery based in New York and London, we would highlight two artists. One Ruby Chishti, featuring sculptures emulating human figures, “Blemishes of time I and II”. Another Debanjan Roy who imagines a Gandhi retired, at this technologies world, and so shows him walking with iPod in hand, one of the sculptures in the series “India Shining”. 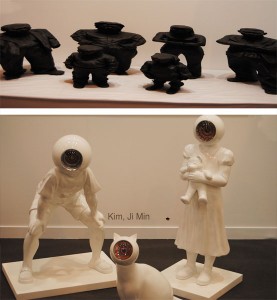 In the gallery of Seoul, Gane Art Gallery we have a bull in one of his fiercest positions, about to charge, built with tires. Work of Korean artist Ji Yonghe. Raquel Ponce’s stand had included works of artists such as Xavi Muñoz Jorge Pineda, two artists used a small number colours in these works, highlighting both the repeated use of red.

Deformed figures of the artist Hwan Know, Yiy , a set of three figures carved with, a similar of the web cams lens, emulating faces with a great eye, of Kim, Ji Min, this are some of the proposals of the gallery Cais Gallery.

The gallery MAM Mario Mauron presents a huge artificial skull covered with mirrors, turning constants glimpses that throws over visitors. Work of Bruno Peinado, that through it returns to the reflection on the vanity. Time stops at the moment of contemplation: we are not in front a night of dancing and party, otherwise we are facing the lifespan.

In the gallery Thomas Schulte highlight works by Richard Deacon “Still Water (Talking the Talk)” which combines wood and metal and Victoria Civera as “Jumba, 2010, where in a linen canvas, blend digital devices.

There were three galleries Galician attending this year’s ARCO, the Adhoc and Bacelos from Vigo and Factoría Compostela from Santiago. The balance of all of them at the end of this event has been very good, apart from sales, they has achieved significant contacts. From Adhoc inform us that due to the presence at this fair Nano 4814, has started the talked with a museum in Shanghai to see in there an exhibition of this artist. Also from Factoria Compostela emphasize that the lower spending by institutions has been compensated by private buyers who have found more feasible and affordable proposals.

Adhoc part of the aforementioned Nano 4814, also presented in this fair proposals of Chelo Matesanz, Reinosa, Jorge Gonzalez Curro Perianes and others. The latter represented with “La broma infinita”, where with the collaboration of Fon Román produced a video animation.

A TIENTAS pero no a oscuras.