It was about rehabilitating and updating a small apartment of 60 square meters, located in the town of Bueu and with stunning views over the estuary of Pontevedra. The idea was to transform it into a summer residence to be able to rent it during holiday periods.

The pre-existing housing dates back to the 70s and was divided into 5 rooms-kitchen, living room, two bedrooms and a bathroom, joined by a large hall. This distribution, so compartmentalized, minimized the level of interior light of the house and prevented to enjoy the totality of the views that showed through the windows. Of the original elements of the apartment were two that most caught our attention and we decided to keep: a terrace with direct views over Lapamán beach, which was accessed through a small door in the kitchen and a spectacular floor of terrazzo of Portuguese pink granite executed in situ and that constituted the floor of all the house, except the one of the dormitories. 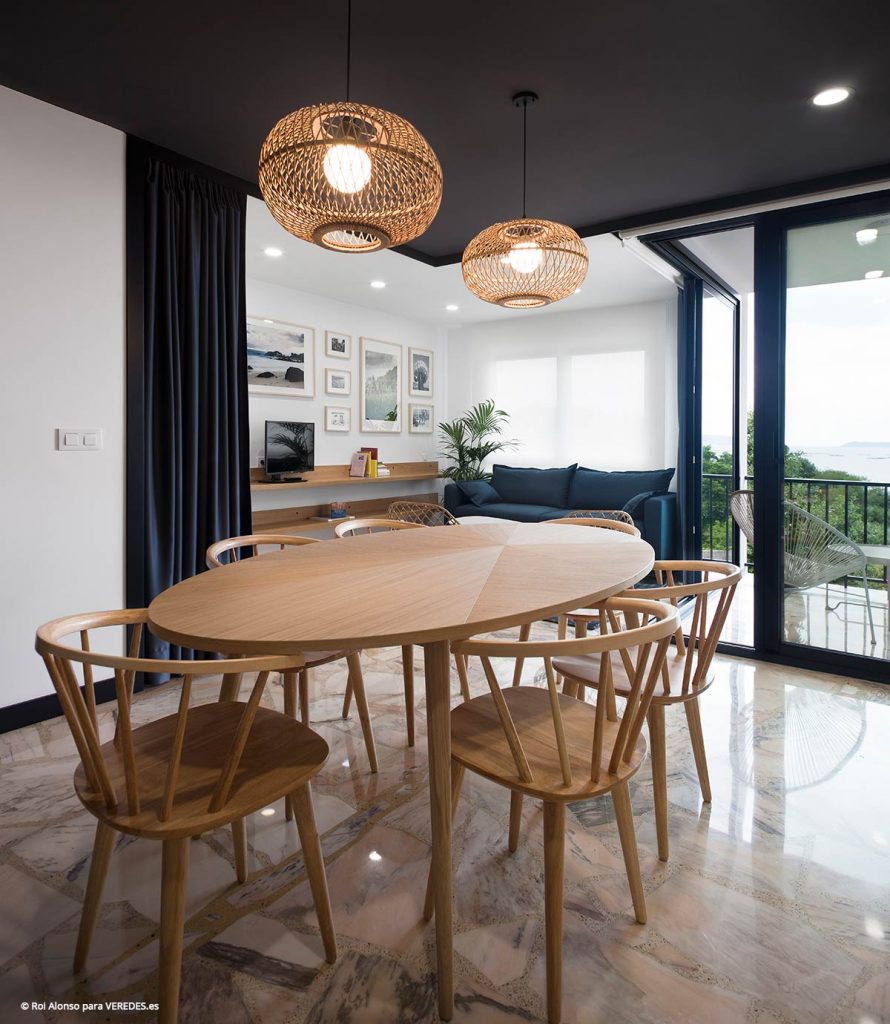 The idea of the owners was – despite the fact that the apartment had only two bedrooms – to accommodate 6 people. They also wanted the apartment to reflect the spirit of the Galician coast, in such a way that, the experience of the tenants, began already in the apartment itself.

At the functional and spatial level, from the beginning it was clear that it was necessary to integrate the living room, the kitchen and the hall into a single visual space, in such a way that the light invaded the entire day area of the house and that the views of the Ría de Pontevedra could already be enjoyed from the entrance door of the house. For this it was necessary to eliminate the partitions that separated the living room from the hall and the kitchen, close the terrace with an L-shaped gallery that allows maximum use of light and views and install a glass screen to narrow the area of the hall, as arrival and reception area.

The two bedrooms were kept and in the diaphanous space of the day area an L-shaped curtain was incorporated that allows to isolate part of the living room to accommodate two people in the sofa-bed area.

From an aesthetic point of view, the pre-existing terrazzo floor and the requirement of the owners to reflect the maritime essence of the Galician countryside served as a starting point for the development and the realization of the interior image of the apartment.

Thus, on the one hand, pushed by the pink terrazzo floor of the house, which evoked the Italian architecture of the 60-70s, we decided to draw inspiration from the work of Carlo Scarpa and the work of Italian studios such as Marcante-Testa, that today they develop their projects in continuation to the style defined in his day by Scarpa: an architecture that flees from minimalism, that seeks originality, that enhances color and that enjoys the play of planes and the use of different geometric shapes. On the other, we could not forget that the apartment is located in a “rural” area, surrounded by greenery and by the sea, so we also decided to combine that postmodern aesthetic of Scarpa with elements of natural inspiration and craft.

The design in the main room of the house is based on the play and contrast of two materials and / or colors that are arranged in different planes: the pink terrazzo in the floor plan and the dark blue -for reference to the Atlantic sea and Galician maritime culture – used both in the vertical plane of interior carpentry and curtains, and in the horizontal plane of the kitchen ceiling, emphasizing even more if possible, the power of Portuguese pink marble.

The kitchen, with modern lines, is designed in white, so that it gives all the protagonism to the two elements described above: the pink of the floor and the blue of the carpentry. The bell is designed free, combined with shelves that allow to see the stored ware. The copper-free bell, the faucet of the same material and the visuals, provide the touch of “traditional” inspiration, in contrast to the modernity of the rest of the design.

n the bathroom we follow the same aesthetic as in the rest of the house. We use subway tile in blue, but placed in vertical as it was done in the 60s and 70s. The piece of the sink on legs and the black faucet help us to reinforce that aesthetic.

As for the interior furniture, we opted for postmodern-style furniture, but with a small “rustic” touch brought by the color of natural wood, to reinforce the aforementioned feeling, that we are in a natural environment, surrounded by vegetation and sea. For the dining room, an oval table was chosen that was combined with Windsor-inspired chairs and natural fiber lamps. The sofa, in blue tones and retro style is also a nod to the furniture of the 60s-70s. The decoration is completed with compositions of paintings with images of landscapes of the area taken by local photographers.