7 ª edition of the International Festival of Architecture eme3

Last week of June, 2012, Barcelona will return to be a scene of 7 ª edition of the International Festival of Architecture eme3. For the second year in a row, the Festival will locate his headquarters in the COAC (Col·legi Oficial d’Arquitectes de Catalunya), as well as in the space eme3 located in the contiguous Plaza of the Cathedral of Barcelona. The interventions and organization of activities are taken again in this edition in different urban spaces of the downtown (Ciutat Vella). 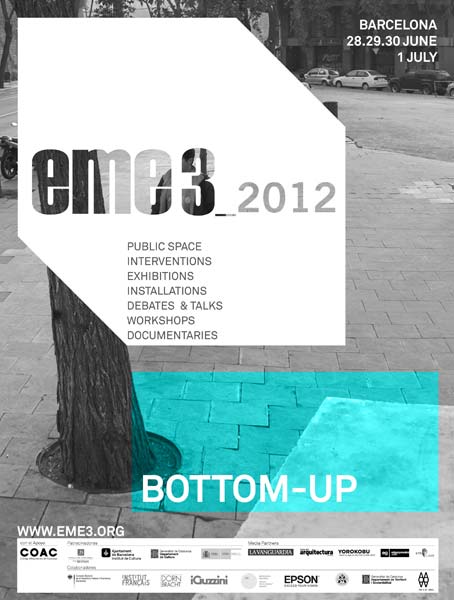 Urban tactics, inclusive city, urban gardens, utilization of lots in disuse, evolutionary strategies, participative design, works in network, open-source, creative communities, are some of the concepts that emerge in the last years to describe an increasing trend of projects out of the conventional practices that solve urban situations, creating new opportunities for the citizen / civil. In the border between architecture, urbanism, landscape painting, infrastructure, design and the digital world, these projects are a fruit of changeable methodologies that they adapt to the context.

Under the concept of “BOTTOM-UP” (from the bottom up), eme3 wants to present methodologies of work and his results, in the shape of urban strategic, participative and transverse interventions, which illustrate a process of creation and of construction, simultaneously that pedagogic and pragmatic, of an environment decided together.

Across a call to projects and invited experts, eme3 presents offers of national and international equipments that work with specific strategies to generate changes projects of both national and international equipments that work with singular strategies to generate changes in urban and social concrete contexts. Each one to his way, these initiatives demonstrate that there exist other ways of exercising the profession, and his increasing recognition, both in the academic world and in the professional world across prizes and public recognitions, it is an unequivocal sign of an evolution in process. The presented projects, be born of orders or of own initiatives, generally they are a process fruit of conciliation between the different actors (users, public and private power) taking the final user as a common axis. As good Yona Friedman says in ‘ Architecture with the people, for the people, for the people ‘.

In eme3_2012, let’s sense beforehand the projects under two categories:

1. “Share-it”: sample of project examples and a series of actions to share experiences across exhibitions, facilities, actions, chats, workshops and you debate.

2. “Build-it”: urban interventions in Ciutat Vella’s lots, in the shape of experimentation and community learning, to reactivate lots infrautilizados or in disuse.

The selected equipments, so much those that take a long path as the most emergent, have presented projects that transmit a load of optimism and that try, in his measure, to give the possibility to the citizens of re-discovering and sharing the public spaces of our cities, enriching the panorama of ‘ the possible thing ‘. They are new ways of constructing the city and of contributing day after day alternatives of life to his citizens.

Eme3, as collective platform of exploration, knowledge and investigation on the evolution and transformation of cultural and social practices on the political thing and the urban thing, he invites professionals and public general to discovering and living through new strategies to change together the city.